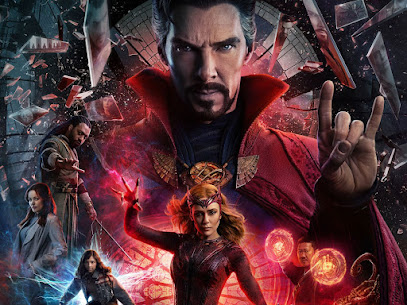 It's officially time to kick off the exciting summer season of movies! As per almost ever year Marvel kicks it off, this time with Doctor Strange In The Multiverse Of Madness. With Sam Rami attached to direct, I was pretty hyped for this movie, and after what was essentially the biggest movie event of the past two years with NWH, I was curious to see what the MCU had up its sleeve next. Rami delivers a smaller scale yet innovative superhero film that sometimes feels held down Marvels formula.

The film takes no time to get going. Without getting into spoiler territory, Doctor Strange and America Chavez (the newest character in the MCU), are immediately brought together & we are given one of the most nostalgic feeling action sequences in superhero films. Watching the first fifteen minutes of this film, theres this genuine early 00's feel. Although the comparison might be an obvious one, it feels and plays out like a fight out of the original Spider-Man trilogy. Strange and Chavez are then brought through the multiverse while having to face Wanda Maximoff, who wants Chavez for her own intentions.

Multiverse of Madness is also a flat out superhero horror. Theres some pretty good jump scares & Sam Ramis eye for horror is seen all throughout the movie. This really allowed for Wandas character to elevate to a whole new level that hasn't been done for her before. Wanda is genuinely terrifying in this movie, after WandaVisions rather disappointing send off, it was awesome to see her here at her most relentless. This might be a hot take, but I think she is just as evil in this movie as Thanos was in the Avengers series.

Of course, where the movie does suffer is where all Marvel movies tend to suffer, its writing. The movie is very much written by the books of the MCU formula, and I'm disappointed it didn't explore as much of its themes as it could've. The multiverse concept felt pretty unexplored by the end of the film, and although there is a-lot of multiverse play and travel at hand, not much is ultimately done with it by the end. On top of this, America Chavez has to also be one of the most uninteresting side characters in recent MCU movies, there's not much that makes her stand out as one of the new faces this ever growing franchise.

Another big gripe I had was with how Wanda was written as a character. Despite the fact that I think that Wanda is one of the standout characters in the film, I do think she was written in a very one dimensional perspective. In the most spoiler free way possible, she has a goal in mind here, and she stops at ultimately nothing to try and get it. Aside from that, her growth as a character is minimal. I ultimately think her character in this was good not because of her story, but because of how different she is in comparison to everything she has done recently.

At the end of the day, Multiverse of Madness has its moments of true greatness, where Ramis style and freedom allow for the film to standout from recent MCU entries. But when it's not doing that, it's treading in the same puddle that the most average MCU movies are in.

Doctor Strange In The Multiverse of Madness gets a 3.5/5!