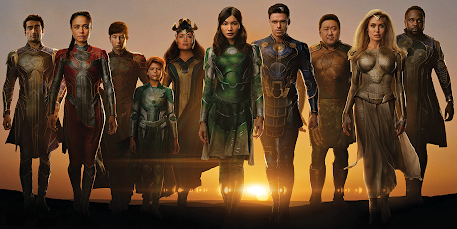 Eternals has been one most interesting sounding projects in the MCU to date ever since its announcement. With over 25 previous films in the MCU, there was a signature style to it so, having something different sounded like a good idea. And the director, Chloe Zhao is a unique cinematic voice who has emerged to popularity thanks to her excellent film Nomadland which was a film with such a beautiful, human story. Zhao talked a lot about doing things differently with Eternals from other MCU films such as shooting on location, using practical effects and so much more which made this a very anticipated MCU film for me. After finally watching it, I can say that Eternals is a refreshing, ambitious film in the MCU that truly stands out.

This film truly feels unique as it feels more like a film from Chloe Zhao and less like a film in the MCU. From the opening frame, it really puts a stamp showing that it's more of an ambitious, Sci-fi film that made it feel Immediately different. This approach is really carried throughout the entire film as it's a relatively, action lite movie for the most part and rather takes its time with character development, motivations, lore and so much more. The thing is, it benefitted the film pacing for that exact reason as it really makes you feel the overall emotional weight the film carries throughout with its questions on life, and the whole act of saving people. For example, the film really dives into the reason why the fact the Eternals never interfered with events within the MCU or any human conflict and it does so in a rather surprisingly thematic way. Beyond a few occasional references to the MCU events and characters within the universe, the film actually feels more contained and less concerned with setting things up for the future (though, there are 2 post-credits scenes that do that!)

Eternals also carries a massive ensemble that all do an excellent job with their performances. If there was a lead to the film, it's Gemma Chan's "Sersi" and she is fantastic here leading the film with such humanity to her role. Richard Madden playing "Ikrais" also does a great job here as he plays a role with great subtlety and depth. Kumail Nanjiani is an actor I have always loved and he does a fantastic job playing "Kingo". Nanjiani plays this role with such confidence and charisma and I'm sure he is going to be a fan favorite coming out of this. Brian Tyree Henry is also someone I love seeing in movies and he does a fantastic job here job as "Phastos". Tyree Henry also plays the role with a great amount of depth which shows how good he is as an actor. My favorite performance in the film though was Barry Keoghan as "Druig" as Keoghan plays a role with such depth and he plays it so well. The entire ensemble in general does a great job here and is all balanced so well.

As for the overall look of the film, the cinematography stands out from the rest of the MCU as Chloe Zhao choose to shoot the film on location and using many golden hour shots and it works to the film's advantage. The film carries Zhao's signature look she used for films like Nomadland as it makes the story feel human and has lots of scale to it. This also makes the VFX blend in well with the live-action elements as the visual effects look great throughout most of the film. For example, one of the best actions scenes in the film involves the Eternals fighting the Deviants as near the end of the 2nd act as the film has an almost "Revenant" approach to the handheld camera work and lighting. It all creates an action scene that wasn't just memorable but, really puts the viewer in the action.

My biggest problem with Eternals though is that, despite its 2 and a half hour runtime, the film does rush through some key character moments that could have used more room to breathe. Now, it's hard to dive into why without saying specific spoilers but, there are certain character moments that are fantastic but, could have used more time to establish itself to have a bigger impact. The film is dense and has lots of characters and stories to it but, it almost feels too much so it could have been condensed.

Overall, Eternals is a refreshing take on the MCU that truly shows that Chloe Zhao is here to stay as a director. It's a film that is really engaging, has some great character moments and, its visual treat that will benefit from being seen on a premium screen in theatres. It may be different but I really hope going forward, the MCU carries on unique visions like this with their future films.

Eternals is coming to theatres on November 5th, 2021