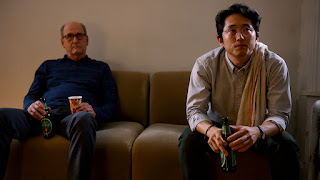 The Humans is a new A24 movie directed by playwright Steven Karam and stars Richard Jenkins, Jayne Houdyshell, Beanie Feldstein, Steven Yeun, Amy Schumer, and June Squibb. It revolves around a pre-war duplex in downtown Manhattan as it follows the course of an evening in which the Blake family gathers to celebrate Thanksgiving. As darkness falls outside the crumbling building, mysterious things start to go bump in the night and family tensions reach a boiling point.

I remember back in 2018 for my drama class, we took a field trip to downtown Toronto to see The Humans on a broadway stage and only going in knowing it was a Tony-winning play. Many aspects took me by surprise including its approach to storytelling and, the excellent production design. This all made me incredibly curious about how it would translate into the big screen especially given the fact that Steven Karam was the playwright on the original and came back to direct the big-screen version of The Humans. After seeing it at the world premiere at this year's TIFF, I can say this is not just a faithful adaptation but, one of the best films of the year!

What surprised me most about The Humans was how faithful it was to the original play of the same name. The movie looks and feels like a play thanks to its brilliant cinematography and it really has lots of interesting uses of Zoom Lens, Wide Angles, Arching Shots and Long Takes that linger for a long time. It doesn't just look insanely well done but, really enhances what the story needs which is making you feel like you are there with the characters the entire time. At the same time, it really uses the cinematic format to its advantage and does things that are not possible on stage. The film has a very selective use of close-ups that are all used to enhance character feeling and feel the claustrophobic nature at times the film makes you want to feel.

The story may seem like something most audiences have seen before but, the story is rather enhanced by how deep it goes into the characters and themes of the story. Everyone in the film is given full development as they really dive into their motivations and what caused them to be the way they are. It's also very thematically rich as there is a lot of the film that is open to interpretation which is something that I love. This all comes from the original playwright, Steven Karam who has made an impressive directorial debut as he brilliantly translates his idea to the big screen.

What's equally as impressive is the cast Karam assembled for the film as everyone here gives such nuanced and layered performances! Richard Jenkins is the true MVP of the film as he has the most layered character and does an incredible job here. Beanie Feldstein and Steven Yuen are also amazing here as they also give equally layered performances that contrast each other. The biggest surprise in terms of performances was Amy Schumer as she subverted her comedy roots and delivered such a vulnerable performance here.

Overall, The Humans is an excellent adaptation of the famous play that shows the power of adapting stories like this to the big screen. With its amazing direction, writing, performances, cinematography, and production design, it stands up as one of the best movies A24 has ever developed. I really hope Steven Karam has bigger aspirations in the film world as he is already looking to be an insanely promising talent going forwards!