Shang-Chi and the Legend of the Ten Rings (2021) Early Review - One of the MCU's best origin stories! (Written by Hussain Alokaily) 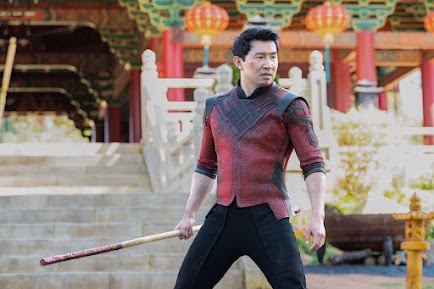 Shang-Chi and the Legend of the Ten Rings is the second film in Phase 4 of the Marvel Cinematic Universe which is directed by Destin Daniel Cretton and stars Simu Liu, Awkwafina, Tony Chiu-Wai Leung, Michelle Yeoh, Meng'er Zhang, and Florian Munteanu. The film revolves around Martial-arts master Shang-Chi as he confronts the past he left behind as he's drawn into the web of the mysterious Ten Rings organization.

After having a fun but, not as forward-moving entry in the MCU being Black Widow, I was really excited to see Shang Chi. The MCU is at its best when it takes brand new heroes the audience has never heard of and brings in what makes that hero unique to the universe. It helped the film had fantastic trailers (Which btw keep a lot of the plot and surprises from the film) which had me counting down to finally see it. I'm so happy to report that Shang Chi is of the MCU's best origin stories that will please so much of the core MCU fanbase.

What immediately makes Shang Chi work so well as an origin film is the quite frankly, great mythology and world-building it brings to the entire MCU. The film brings the entire MCU full circle as it connects to the Ten Rings organization that was teased throughout the Iron Man films and manages to show their inception to the MCU. This makes so much of the flashbacks so fascinating to see as this is a new territory the MCU has never explored before and it makes the MCU fresh in a new way.

It's not just the mythology that's great but, is also the surprisingly emotional and tragic origin story it tells for both the heroes and villains. The film takes a lot of time to develop Shang Chi as a protagonist showing how he was raised and what led him to try to make his own life as a person away from his roots. It also manages to develop the villain "The Mandarin" as he has complex motivations that are fully explored and make sense. The makes the viewer so invested in both sides and see how tragic the situations of both characters truly are. The film nails its theme of family but also heritage as it makes it culturally significant and relatable to all viewers watching. Destin Daniel Cretton brings a lot of what he learned as a director with films like Short Term 12 and Just Mercy and beautifully directs the film with such humanity to it. The film feels like there is a singular vision to it and Cretton already shows how much more of how good of a director he is.

In terms of overall casting and performances, everyone brings their 110% to the film and delivers amazing performances. Toronto's own, Simu Liu absolutely kills it as Shang-Chi as he makes such a huge impact on his debut role. Liu plays the role which such confidence and charisma but also manages to give a very vulnerable performance that sells the emotion of the film. He is already one of my favorite heroes in the MCU and will sure to become many fan's favorites as well. In addition to Liu, Awkwafina plays Shang-Chi's best friend, Katy and she also has such a huge impact on the film. Awkwafina has electric chemistry with Liu as you instantly buy into their friendship the two characters have. A lot of the comedy also comes from Awkwafina and the jokes consistently hit throughout the film. The best performance the film has though is Tony Chiu-Wai Leung as he becomes one of the best villains in the MCU to date. The role is played perfectly by Leung as he plays a sinister yet, sympathetic villain that is played with such emotional depth.

What also sets Shang-Chi apart from many films in the MCU is how much they go above and beyond in terms of the action, camera work, and choreography. Seriously, the action in Shang-Chi is some of the MCU has ever done as it's all filmed so beautifully and really showcases the fantastic work of the actors and stunt team. The action is full of so much energy that makes every action scene hit hard and makes them so exciting to watch. The film manages to also have top-notch VFX and Production Design that really brings the best in the world and creatures the film has. It never takes you out of the film and makes you truly believe in what you are seeing on the big screen.

In terms of how it fits into the overall MCU, the film has so many surprises to it that will make long-time fans of the MCU very happy. There are two post-credit scenes that both further teases the epic scope and scale the MCU is bringing to Phase 4 of the MCU.

Shang-Chi however isn't perfect as it has flaws that slightly hold the film back. The film is very flashback-heavy as many of them really hit hard in terms of developing the plot and characters. The flashbacks show a lot of cool aspects of the MCU and really hold your attention throughout. The thing is that these flashbacks also make the second half of the film slow down a bit and while I enjoyed the entire film, I do wish they slightly trimmed down the second half a bit to keep up with the energetic first half.

Overall, Shang-Chi and the Legend of the Ten Rings is such a great addition to the MCU as it's one of the strongest origin stories yet. Despite its flaws, the film has fantastic world-building, a strongly tragic story, fantastic direction, performances and delivers the MCU's best action to date. Not only do I think the film will please the core MCU fanbase but, will also connect to many people regardless of culture. I'm for sure seeing this again in IMAX opening weekend because this is well worth the trip to the theatres right now.

Shang-Chi and the Legend of the Ten Rings releases in Theatres September 3rd, 2021