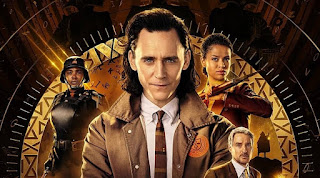 **Note: The following review will have no specific spoilers on plot points or hints of where the story goes. The first 2 episodes have been provided for review so this will be a general review of both episodes with the focus of the review being on the first one only.**

Loki is the latest entry in the Marvel Cinematic Universe that’s directed by Kate Herron and stars Tom Hiddleston, Owen Wilson, and Gugu Mbatha-Raw. It revolves around the titular character “Loki” as it answers the question of what happened to the Loki seen in Avengers Endgame that took the tesseract?? Loki ends up being sent to the TVA (Time Variance Authority) where he then gets recruited to restore the branching timeline.

When many of the Disney + MCU shows were announced, I was extremely excited for shows like WanadaVision and Falcon and the Winter Solider. However, the one show I wasn’t really ever excited about at first was Loki. Sure, Loki was one of the highlights of the MCU but, he already had his arc in the MCU and it didn’t help how mysterious it was on where he went after Avengers Endgame. However, once the trailers started coming along, my perception of the show changed and it instantly became, one of my most anticipated MCU projects due to how strange and weird they were going to get with the show. After seeing the first two episodes, I can officially say the show so far delivers as the first two episodes do a great job of setting up this story!

My biggest question going into the show was if it was at all worth going back to the character of Loki as his character arc in the MCU was treated really well and had an impactful death in Infinity War. Thankfully, the first two episodes find a new way to humanize Loki and make him worth exploring again! What also makes the series fun is the fact this is a version of Loki from after the first Avengers which makes this character that much more likable. Tom Hiddleson once again, shows why he was born to play the character as he owns every moment of screentime he’s in. As for other cast members so far, Owen Wilson is excellent in the show as Loki’s partner as he provides such a fun comedic balance. 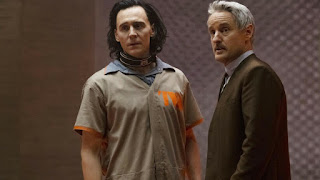 As for the show itself, the biggest thing that stood out within the first 2 episodes alone was, how much world-building there was within the MCU. Never before have we heard and seen of the TVA which makes this section of the MCU one that is super unique. It’s the latest example of how Marvel has been going in a more wacky direction with a few of their stories that make each show/movie super unique within the same universe. This is made so much better by the show’s overall direction, production design, and cinematography which really emphasizes how strange everything is. It really feels like a lot of the show is in lots of practical sets that look so detailed and unique.

Before closing the review, I wanna briefly talk about the second episode. The first episode (That’s dropping June 9th) is a great introduction episode that lets a lot of character development come in. The second episode (Dropping next week) really starts the show engine by bringing in so much mystery, fun set pieces and really got me wanting more by the end of the episode.

Overall, Loki is so far showing that once again, the MCU is ready to take their universe in weird, wacky directions and shows how unique Phase 4 will be for Marvel. The show finds a way to make the Loki Character fresh again while also delivering such good directing, cinematography, and production design. After seeing these 2 episodes, I cannot wait to see where the show goes from here!