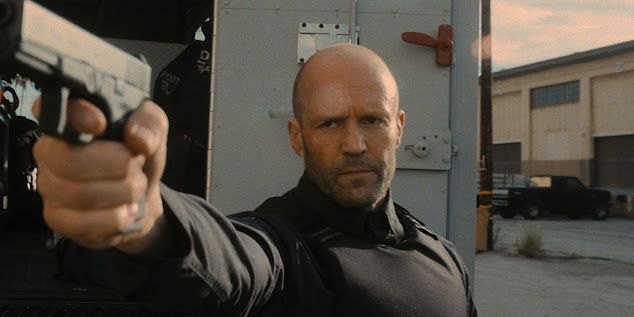 Wrath of Man is the newest film by Guy Ritchie and it stars Jason Statham, Holt McCallany, Josh Hartnett, Scott Eastwood, Laz Alonso, and even Post Malone. It revolves around a mysterious and wild-eyed, new security guard for a cash truck who surprises his co-workers when he unleashes precision skills during a heist. The crew is left wondering who he is and where he came from. Soon, the marksman's ultimate motive becomes clear as he takes dramatic and irrevocable steps to settle a score.

Guy Ritchie is not the most consistent director however, he is one I always pay attention to whenever he releases a new movie. His style is one that is always unique to whatever project he tackles that has made films like Sherlock Holmes, Sherlock Holmes: A Game Of Shadows, and Man from U.N.C.L.E so memorable to me. However, Aladdin was fine but did not even feel like a Ritchie film at all and, The Gentlemen has its moments but was overall a convoluted mess of a film. After seeing Wrath of Man, I can say it’s better than The Gentlemen but it’s no Sherlock Holmes for me. It’s a decent action thriller that has a lot of problems.

For about the first 30 minutes though, the film actually had me engaged and really liking it. It begins with an overall decent bit of mystery to the main character played by Statham and to his overall motivations which allow the viewer to settle into the film as a whole. Add in a great and committed performance from Statham and it overall had me on the film’s side from the beginning. Its approach to the pacing does allow the character’s journey to be overall engaging enough to want to see through to the end.

What also works very well is the direction by Guy Ritchie. Even though the style is less in your face than his other films, Ritchie manages to film the action and overall dialogue scenes in such creative ways that it made the film look more like a film rather than a TV film. This is carried into the action scenes which are very suspenseful due to all of it being grounded in realism. Each action scene takes time to play out which allows the tension to come through.

However, what makes the film ultimately average is its rough pacing as the film runs for 2 hours and a good 15-20 minutes could be cut out. The first 30 minutes works really well as it throws you in and the mystery initially holds the film together. Unfortunately, after the first 30 minutes, the film feels the need to cut back to so many flashbacks and even show events from different perspectives which dilutes the main focus of the story. So many detours happen that it overall made me lose interest in the film. Thankfully, by the last 40 minutes, the film once again becomes a decent watch but the film overall suffers from its pacing. The film also repeats the same notes from its score over and over again which made the score overbearing a lot of the film. Even a bit of diversity in the score would have made it much better.

In conclusion, Wrath of Man is a decent film that unfortunately goes on a bit too long for its own need. The film has its strengths with its direction, camera work, action, and its leading performance so it’s a film that isn’t bad. It’s just isn’t a film that commands being seen on the big screen so if you want to wait and see it on streaming, I can’t exactly blame you.

Wrath of man gets a 2.5/5!
Labels: 2021 Movie Review Written By Hussain Alokaily