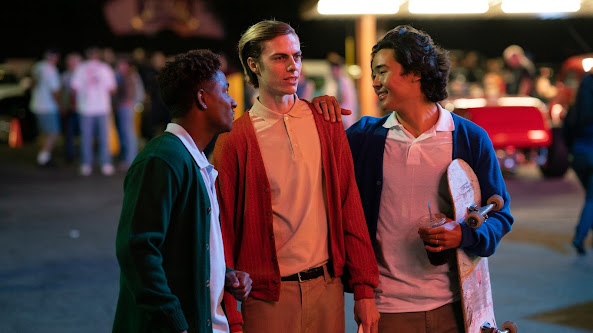 Less than 5 years ago, the likeliness of one knowing what IllegalCiv was depended on how much Tyler, The Creator you listened to, and if your life slogan was skate or die. Now, that's all about to change as the brand/collective is shifting its gears into becoming "The First Teen Movie Studio". North Hollywood, the first film to be produced & self-distributed by IllegalCiv themselves starring Ryder Mclaughlin (Mid90's), Nico Hiraga (Booksmart) & Vince Vaughn (Freaky). The film follows Mikey, a high school graduate on his pursuit to follow his dreams and become a pro skater. Directed by Mikey Alfred, the founder of IllegalCiv,  the film is bound to instantly become a classic for skaters, moviegoers, and just about everyone in between.

The biggest takeaway from North Hollywood has to be its true commitment to authenticity all around. Watching the film truly feels like you're having a day out with your skater friends, or sitting in a room watching said friend fight with their dad about how much time they're spending at the skatepark. The highlight tape/trick sequences genuinely feel like you're watching a CKY-Esque skate video or really, just a banger skate video posted on IllegalCiv's Instagram.  The cinematography is simply breathtaking, in the sense that there isn't one moment that fails to capture the vibrant backdrop of North Hollywood, Cali. Cinematographer, Ayinde Anderson is definitely a talent I'll be following for the next few years to see where he goes next.

North Hollywood's performances are all great. Ryder Mclaughlin really gets to show off his acting chops that we got glimpses of in Mid90's. Vince Vaughn does an excellent job at being the asshole but caring father figure and kills it as usual. However, one standout, in particular, is Nico Hiraga as Jay. Hiraga plays not only this role but ALL his roles I've seen him in with such charisma and charm, but simply put, this is the role he was BORN to play.

The only big "iffy" with the performances here was Miranda Cosgrove's performance as Rachel. Yup, you read that right, Miss ICarly herself who's played an eighteen-year-old for eighteen years is still the high school senior she's always been. Her delivery with the performance felt very monotone and sometimes out of place. Her character didn't bring much to the table other than the love interest and the obligatory "Oh sh*t! It's ICarly! Wait, WHAT?"

North Hollywood's screenplay is fantastic, it gets straight to the point and handles these subject matters of growing in such a realistic way. Every argument, discussion, or even one-liner is some of the most authentic teen dialogue I've seen since Kids (1995) or Mid90's (2018).  Speaking of Mid90's, there is going to be ALOT of comparison between that & NoHo. The stories do relatively flow in the same direction with the same kind of atmospherical tones to them, but the goal of what each of these movies is trying to say is what separates them and creates for likely one of the best double features of all time.

At the end of the day, North Hollywood is going to be a HUGE hit. TikTok's are going to milk its aesthetic to the end, skaters will hands down worship it, and the rest of you folks will be amazed at how seemingly flawless it was for IllegalCiv to get right into movie making.

The film will be made readily available on streaming services later this month, however, IllegalCiv is offering special advanced screenings on their site. To purchase tickets, click the link HERE!