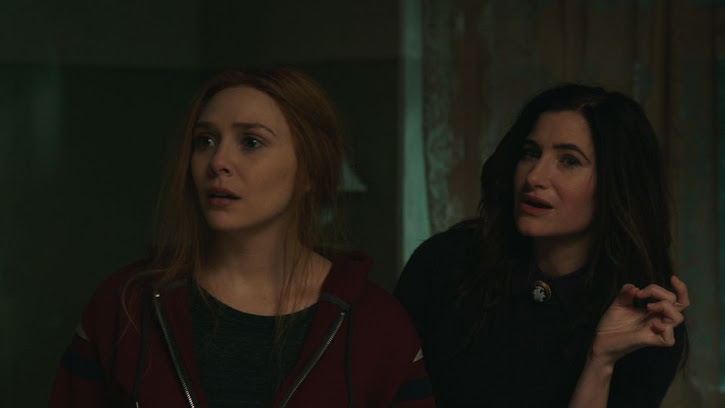 “Previously On” is the latest episode of WandaVision which is directed by Matt Shakman and stars Elizabeth Olsen, Paul Bettany, and Kathryn Hann. The episode picks up immediately after the last one as Wanda embarks on a troubling journey revisiting her past for insight into her present and future.

We are in the final stretch of the series as Episode 8 aired today and it’s insane to see how far it has come. From each week building more excitement and anticipation to each cliffhanger getting harder and harder, it has made me feel excited for the MCU which I haven’t felt in a while. For this episode, my expectations were high as this is the second to last episode of the series as naturally, some answers were expected to be given. Not only were answers delivered, but they also managed to subvert expectations and deliver the strongest, character-driven episode yet!

The best part of the episode is how character-driven it is and hope it develops so much on Wanda and even Vision. The last few episodes have cut back and forth between Wanda’s reality and the S.W.O.R.D subplot as tensions have risen yet with this episode, the episode is primarily forced on Wanda and Agatha as they take a look back into Wanda’s past leading up to the events of the show. This includes her tragic loss of her parents, her context on her abilities, her past with the Avengers, the S.W.O.R.D break-in, and her creation of reality. This gives so much more depth into Wanda and even fills in various blanks that were left in some of the films. For example, it was always told in Age of Ultron why she felt hatred towards Tony Stark but never really shown which made her statements feel very hallow. Yet within the show, her house with her parents gets blown up and it is shown that a ‘Stark Industry’s” missile hits which perfectly describes how she felt in that film. The episode also showcased her grief when she saw Visions’ dead corpse at the S.W.O.R.D base where Elizabeth Olsen really gets to shine with her performance. Olsen is on another level here as she outdoes her performances and delivers something very strong.

Speaking of performances, I also want to bring up Kathryn Hann this time as Agatha as we really get to see her true side in this episode and she simply chews up the scenery she has in this episode. Hann owns every moment in the discussion she has with Wanda as she really makes her seem powerful from her performance without really using her magic much in the episode. It makes me especially excited to see how she is expanded upon in the next episode. The episode also begins with a cold open with her past in the 1600s as it is shown how powerful she is and her practice of dark magic. There is a part of me that wishes they had more time to expand upon that but that’s something that could be fixed in the next episode.

The biggest part of all is the overall answers given in this episode on what was happening. The hugest part is exactly why there is a sitcom aspect to the show and why it shifts in decades. Then episode shows that her parents introduced her to sitcoms such as “The Dick Van Dyke Show” and “Malcolm in the Middle” and how that represented a happy side of her herself and having a life like that. This episode shows that side of herself which makes the sitcom aspect of the show that much better. The next answer it gives is on Vision’s dead body as it turns out, Wanda does not physically take from the S.W.O.R.D base and instead, goes to Westview and creates the reality and as of result, physically creates a version of Vision. This answers how Vision was dying outside of her reality and how he does not remember any events in the MCU. And of course, as of tradition, it seems with the show, the episode once again ends with a massive cliffhanger setting up the next and final episode of the show.

Overall “Previously On” might be a contender for one of the best episodes of the series so far as it doesn’t just do its job in answering desired questions but manages to deliver a character-driven episode with so much emotional weight to it. Next week’s episode is going to have so much pressure to stick the landing and deliver something satisfying but knowing the MCU’s general ability in doing that, there’s little reason to doubt that.
Labels: 2021 TV Written By Hussain Alokaily