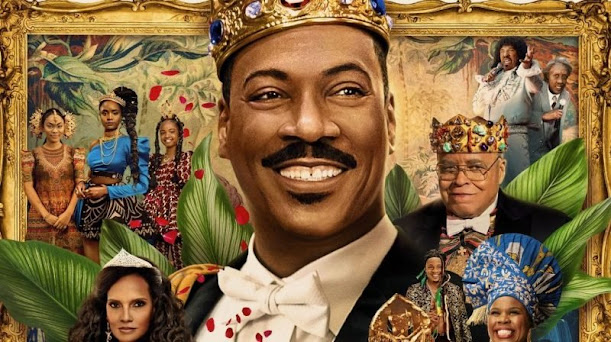 Eddie Murphy was at one point the funniest human alive. He ruled the 80's with stand-up specials like Delirious (which to this day is the funniest standup of all time in my opinion) and of course the fan-favorite, Coming To America. Not only is Coming To America an amazing comedy, but it is also a time staple of the shiftings of American culture. 33 years later Murphy is back with Coming 2 America. While its heart is in the right place and there are some funny moments scattered throughout, Coming 2 America will never be comparable to its predecessor as it's essentially something completely different. Coming 2 America finds Prince Akeem (Murphy) who is now a king in the land of Zamunda still living a luxurious life. When his confidante Semmi (Arsenio Hall) informs him that Akeem had a son from a hookup on their last trip to America, they embark on a journey to find him and make him a prince.

SIKE, that's what they want you to think. In total throughout the film, Akeem and Semmi are in America for about 15 minutes of its nearly two-hour runtime. The film takes place mainly in Zamunda (aka Rick Ross's property in Atlanta, literally), following the retrieval of Akeems son Lavalle as they train him to become a prince. That really p-d me off, especially for a sequel to a movie about an American Journey. While the land of Zamunda is visually stunning and for the most part not boring to be in, it simply isn't the same.

The humor is extremely hit or miss. When it misses it misses horribly but when it hit's boy is it ever damn funny. What really stood out though is how hard this movie pushes the PG-13 rating. Scatter a few more jokes or innuendos in and this easily could have obtained an R rating (as it should have since the first was a solid R). Eddie Murphy is still funny for sure, but there's no comparing his gags to the gap-toothed funny boy we still love today (well, some people). That being said, Murphy doesn't only play Akeem in the film. He plays a hell of a lot of characters, most notably the queen's barbers who return from the old film. Those scenes are still comedy gold and likely the only comparable part to the first film. The film is filled with a huge cast. Tracey Morgan, Wesley Snipes & Leslie Jones are just a few who are in the film and luckily, they bring their solid comedic chops to the table.

The biggest problem Coming 2 America has going for it is how grand it tries to be. There is a lot going on in its nearly two-hour runtime and a lot of it simply doesn't work. There's a huge subplot with Akeems daughters that wasn't necessary, a conflict with the neighboring region Nextdoria that also drags a bit. By the 1hr 25 marks, you'll likely be checking the time left. We end off with a grand music number that goes way too longer than it should have and leaves an iffy taste in your mouth.

All being said, you can tell Coming 2 America tried. There's no half-assing to be seen anywhere. Eddie and Arsenio seem genuinely happy to be able to make a sequel to arguably their most memorable roles in film and deep down the film has a good heart. While I won't be one to urge you to see this immediately, I also don't wanna trash it too hard. No matter what it was nice to see these characters back in action after a long ass time, and even if it's not the same as it was before, it was still something.