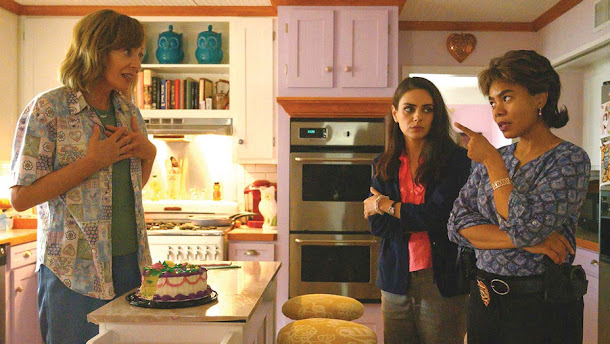 This tepid dramedy may have looked good on paper with a stacked cast and a passable premise, but not even Regina Hall, Awkwafina, or Wanda Sykes could honestly save what feels like a pretty meager attempt at emulating a Coen Brothers film.

The basis is that Sue Bottoms, played by Allison Janney, a meek suburban housewife with a monotonous life finds her husband cheating on her; after an unprecedented happening, Sue  gains what she has always craved in life: attention. She is joined by her reporter sister, played by Mila Kunis, who only helps to further bring awareness to the situation. Regina Hall plays a detective with a radar for nonsense who simultaneously has to keep an eye on the circumstances and case surrounding Sue Bottoms as well as being thwarted by wanna-be mobsters, played by Awkwafina and Clifton Collins Jr. Hijinks ensue as my attention span withdrew…

Director Tate Taylor has had quite a history of hit or miss projects and Yuba County is no exception. The script he had to work with had much to be desired, but even with his lineup of mega-stars, the whole thing just kind of falls flat. Many times, the cast appears to be confused or have little to no direction, and in most of the times that things actually work, it feels generally improvised or a personal touch from the actors on screen, instead of a deliberate direction or instruction from behind the lens.

This isn’t to say that there aren’t moments where the film gives glimpses of what it could have been; there are beats and scenes where the comedy lands or the performances get to shine through a bit, but it sadly ends up tripping over itself to become a muddled mess of an ultimately unfulfilling 100 minutes.

To cut the film a bit of slack, I do have to say it is entertaining… enough. It’ll get a few huffs of laughter from viewers and perhaps keep an audiences’ attention for a decent amount of time. This film should never have a theatrical release, rather, it would fit quite well going straight to streaming on a platform like Netflix or Hulu. I can see thousands throwing this on their televisions as background noise, in turn, giving it a hefty amount of watch-minutes before it fades back into the collection of dusty mediocre movies that people often forget were ever made.

Breaking News in Yuba County is a sure misfire but could pass as some cheap fun to stream on your service of choice. The directing and writing is a dismal letdown, but this isn’t to discredit the talent on screen. Throughout the film, they seem to be feeling quite similar to how the viewer may very well feel: confused and disinterested.

Special Thanks to VVS films for the screener!