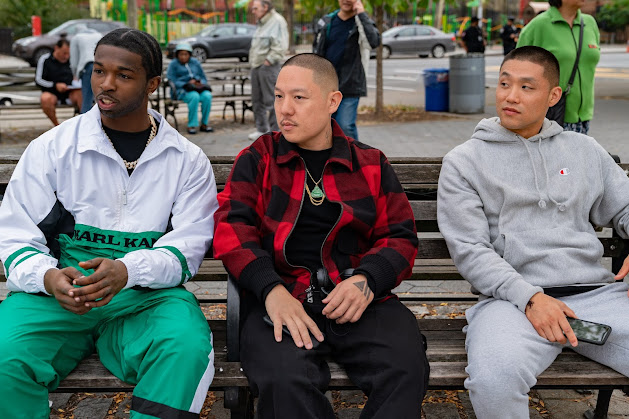 Eddie Huang is one of the coolest people in the entertainment industry, his show Fresh Off The Boat was one of my favorite shows back in my high school days and I'll always anticipate his new projects. Huang ventures off into the film side of things with his directorial debut Boogie. Also written by Huang, Boogie follows Alfred aka Boogie (Taylor Takashi) a high school senior & basketball star who dreams of playing in the NBA one day. As his parents continue to pressure him to focus on scholarship opportunities, Boogie must also juggle relationships, high school, his temper, and most importantly, beating the best baller in New York, Monk (Pop Smoke (RIP)).

Boogie is a crowdpleaser. In a normal world, Boogie would be the movie on cheap Tuesday that sells out instantly & filled with loud high school students. It has everything it needs to work there, a teenage demographic, a dope hip hop soundtrack & a relatable story. Despite the nuisances that come with an experience like that, this is exactly what this kind of movie needs to thrive. Unfortunately for a lot of readers, the odds of that happening are lower than Pop Smoke's voice. On top of that, Boogie suffers from a lack of direction, stiff acting & horrible casting choices that really affect the great things about this movie.

Starting off with the positives, Boogie does a really good job and creating a teenage atmosphere that doesn't feel dated. The slang dialogue on display is extremely reminiscent of how we teenagers talk today. The situations such as trying to flirt, high school classroom discourse & tension are done superbly well. Huang knows how to capture this age & generation really well and I'm excited to see what he does in the future. The cinematography is also great, beautiful shots of New York are all on display here in a captivating way. I also really liked how much mandarin was spoken, many scenes are not spoken in English which adds such a great effect to the cultural themes. The performances were well for the most part, specifically from Taylour Page as Alfred's love interest Eleanor. I'll get more into Takashi and Pop Smokes performances in just a bit as there's a lot I need to say.

Where Boogie begins to suffer heavily is in its actual script. Boogie doesn't know what it wants to be. It wants to be a coming of age story, a strong commentary on Asian culture & a sports movie. Individually, these aspects work relatively fine on their own, but in the grander scheme of things, it just feels weird. The film wants us to focus on so many things as the one main focus. In the simplest of terms, it is overkill. I respect Huang for trying to create such a filled universe but it simply doesn't give enough time for every plotline to flourish. By the end, it's ultimately solely focused on the sports aspect of it all, as if everything else that came before didn't really matter. Weird to say, but at the moment these things work, but after it's all been absorbed it feels like a directionless time.

Taylor Takashi & Pop Smoke are fine for what they are given. Pop Smoke plays a good villain and it's sad we will never get to see him in anything else. Taylor Takashi isn't the best actor out there, but it's never to the point of bad. What is bad, however, is how impossible it was for me to believe that either of these two was high school seniors. This has to be two of the worst casting choices I've seen in my life. Takashi looks like a 35-year-old hypebeast dad. Whereas Pop Smoke just looks like a grown-ass man. This is not the fault of either of the actors but most definitely the casting directors. You're telling me, these two men who are decked out in tattoos head to toe are 17 going on 18? Pfft, Yeah and I'm twelve.

At the end of the day, perhaps the experience I had viewing Boogie wasn't the best. Being alone watching it on a laptop screen without the crowd chants and hype from the audience likely made me think into it much more. The simplest way to describe this would be a movie that most definitely benefits from being watched with friends on a Friday night. I'm sure in a situation like that I'd appreciate it much more. But for now, Boogie can't Boogie its way out of being extremely mid-tiered.