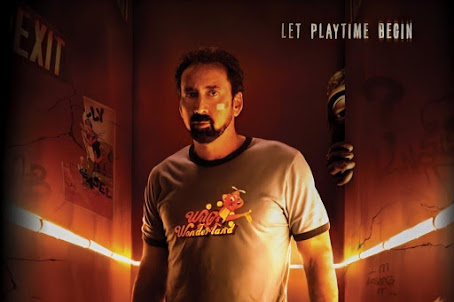 I mean, if this is the closest thing we'll get to a Five Nights At Freddy's movie, I guess I'm okay with that. Willy's Wonderland is the new horror-thriller directed by Kevin Lewis starring the one and only Nic Cage. When his car breaks down, a quiet man (Cage) agrees to clean an abandoned family fun center in exchange for repairs. He soon finds himself waging war against possessed animatronic mascots while trapped inside Willy's Wonderland. Listen, if I were to sit here and dissect everything this movie has to offer it would be pointless. Willy's Wonderland isn't setting out to be the next Citizen Kane and that's okay. For what it is, Willy's Wonderland is a clunky B-Movie that works for what it is, but not without some unforgivable flaws.

When you find yourself sold on a wack plot with someone like Nic Cage, his performance is almost pivotal as to how you'll react. He can be serious, he can be funny, he can be bonkers, but here? Here he is silent.  The ENTIRE movie. Not one ounce of dialogue comes from his mouth once the entire film. Instead, he grunts, slurps, and angrily yells gibberish to get his "points" across. At first, it's kind of funny, but slowly it gets stale. The B plot of the film involves a group of teenagers attempting to burn Willy's Wonderland down but instead end up trapped inside. When the group and Cage come together in the film, he still says squat. It honestly makes zero sense, as any person in their right mind would have some sort of reaction when kids are getting slaughtered by Chuck-E-Cheese wannabes left, right, and center.

Speaking of that B plot and the group of kids. THEY CAN'T ACT. Almost every single one of those actors except Emily Tosta as Liv can't act for the life of them. Furthermore, there seems to be no sense of connection between any of them. It's almost like the casting director just saw the first group of kids in the audition hall and was like "YUP YUP THOSE ARE THE ONES NIC GET THEM IN HERE" and that was it. Considering that these teens are likely playing ya know, underage teens, it was also really weird to throw in an insanely prolonged sex scene between two of them. I know this is nothing new in the world of horror, but this just felt really pointless, long, and out of place.

Now, for the most important aspect of this animatronic horror flick, the animatronics. The animatronics look sick. The way each of them moves differently and has a unique & deadly ability is truly really cool. Their kills are crazy and I loved almost every sequence with them. However, it feels like the budget with what they could do with them was very limited. The fight scenes are edited so absurdly that you can barely tell what's happening at times and simply, the scenes are too short. Nic Cage is so overpowered that he kills them each off in what feels like a minute. And even when they do die, the gore is super hit or miss.

At the end of the day, however, you get what you get, and with a movie like this, you likely know what you're getting into. A sloppy, weird, poorly made albeit fun movie that could have worked a little harder to go that extra step. B-movie stans will likely appreciate the hell out of it, but for those looking for something magnificent, proceed with caution.

Special thanks to Screen Media Films for a review copy of the film.