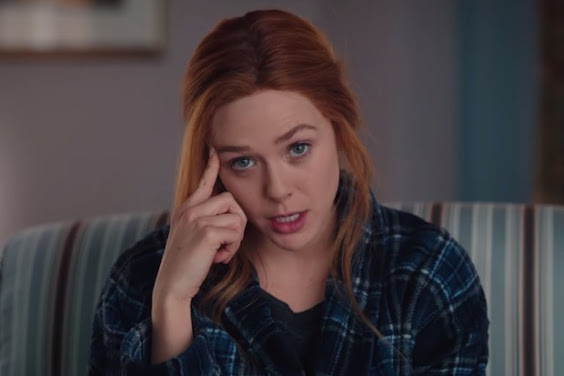 “Breaking the Fourth Wall” is the latest episode of WandaVision which is directed by Matt Shakman and stars Elizabeth Olsen, Paul Bettany, Kathryn Hann, Teyonah Parris, Kat Dennings, and Randall Park. The episode takes episode focuses on Wanda she navigates unsettling complications, and Vision forms a new alliance and Monica stages her return.

Last week’s episode was a great episode that provided more answers than expected and even ended with such a major cliffhanger that had audiences ready for more episodes of the show. It is exactly why I got up early today and started my morning off watching the latest episode. The weekly waits have been nothing but exciting and fun to speculate on where the series is going. After seeing today’s episode, I am once again thrilled with the episode and I’m more excited for the last two episodes than ever before!

The episode once again shifts formats as it replicates the mockumentary style that takes direct influence from The Office. Personally, I was never really big into that show but it was interesting to see how WandaVision replicated that show from its intro to the style of filming and talking head sections. The humor of the episode was further enhanced by the chosen format as it managed to deliver the dry humor of the office extremely well.

However, the big part of the episode is how it seems to reveal that Agnes is the actual villain of the show as it reveals through quick flashes how she has been controlling things all along with an admittedly funny sequence. The biggest part is how it reveals that Agnes has been controlling Evan Peter’s Quicksilver all along as it answers how that Quicklsivewr knows about things in the MCU when he’s from the Fox X-Men universe. It is undermined if Agnes had the ability to pull that Quicklsiver from one universe to another but it seems to be heading to that direction. Also, Agnes killed the dog Sparky so now things have to be personal with many fans. The reveal once again works as it answers the question of how she has been in Wanda’s presence and hasn’t minded her powers and her own kids growing up at an unusual rate.

What this episode overall archives at is setting up what’s at stake for the next 2 episodes coming. It sets up the villain, gives real answers, and sets up the tension higher than the last episode. What’s also exciting is that the big secret actor that Olsen and Bettany have been teasing wasn’t Evan Peters so the jury is currently out on that. It goes to show that the next episodes are going to be episodes fans of the MCU won’t wanna miss.
Labels: 2021 TV Written By Hussain Alokaily