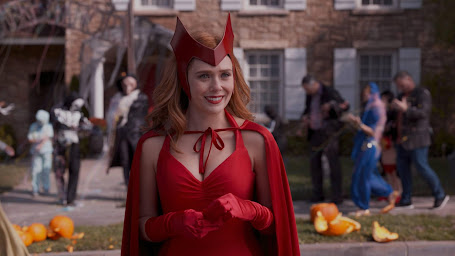 “All-New Halloween Spooktacular” is the latest episode of WandaVision which is directed by Matt Shakman and stars Elizabeth Olsen, Paul Bettany, Kathryn Hann, Teyonah Parris, Kat Dennings, and Randall Park. The episode takes place on Halloween and disturbances separate Wanda from Vision, who looks into anomalous activity in Westview as Wanda goes on a Halloween trip with her kids.

Last week’s episode of WandaVision was easily the most pivotal episode yet as it didn’t just start to reveal so much about the plot but also introduced something in the MCU that shocked fans all over the world. This made the wait for the next episode that much harder than it was beforehand as the second half of the season comes into play. While this episode was not as shocking as the last one, this episode manages to continue the story along and set up something big for the rest of the season!

The first thing that surprised me about this episode was which era of sitcoms they parodied as they did not go into the ’90s and seemed to jump into the 2000s. The most surprising part was they did not imitate a multi-cam sitcom but rather the single-camera ones that were popularized in the 2000s. This time the show they directly take influence from is Malcolm in the Middle from the trippy intro to Wanda’s kid narrating the episode as Malcolm would. This all as a fan of that show, this episode put a massive smile on my face as Malcolm in the Middle was a refreshing comedy in its time as it did not use multi-cam and laugh tracks and went for unique single-camera work and clever use of editing not possible in multi-cam work. To see WandaVision highlight clever camera work this episode and clever use of editing really made this episode stand out. (P.S. I hope this means Malcolm in the Middle actually comes to Disney Plus soon.)

As for the episode itself, this episode gave a bit more context to what version of Pietro that Evan Peters would be playing as the big question would be if he is from the MCU or the Fox X-Men universe. This episode suggests it’s the MCU who’s in the body of the alternate X-Men one as it is revealed in the episode that Pietro knows what Wanda is doing, knows about events in the MCU after his death, and even results in Wanda briefly seeing Pietro’s dead body like she saw Vison’s briefly in episode 4. This suggests that this version of Pietro is not controlled by Wanda as she seems to be controlling everyone else around her. As for Evan Peters in this episode, he seems to be having a blast playing this character again as he manages to steal so many moments of this episode.

Another part of the episode is Visions’s storyline where he decides to investigate and see what’s really happening and the results are something. Firstly it seems parts of the town people are not active as they aren’t moving which shows cracks in Wanda’s whole reality. This is further evaluated when Vison finds Agnes and snaps her out of Wanda’s control only to remind Vision that he is in fact dead. Agnes has been debated to be a villain and it seems that the episode reveals Agnes is under Wanda’s control and isn’t really a villain. There have also been many theories as to whether Vision is only in Wanda’s mind or not as if he’s actually alive and the episode directly confirms he is sorta alive. When Vision steps out of the field Wanda created only to slowly disintegrate before being saved, it is shown that Wanda is what brought Vision back and without her, he isn’t actually alive.

The biggest part of the episode of course is the ending which starts to show real cracks and directly sets up what is supposed to happen in the next 3 episodes. When Wanda realizes that Vision is about to die at the hands of SWORD, Wanda stops the simulation she created and literally expands her reality out further to absorb in all of SWORD wrestling in many agents getting sucked in including Darcy. The episode literally then ends there as it leaves the audience eagerly waiting for next week’s episode. There are 2 huge takeaways to this episode and for what could play out further. Firstly is how Wanda once again is shown to be in control as she has literally paused her reality for a moment which shows how much power she really has. The second part is her ability to expand her reality further if she wants which also shows how much power she really has. This is setting up really what power Wanda has which has me more excited to see how this will lead into Doctor Strange 2 considering she’s also going to be in it.

Overall “All-New Halloween Spooktacular” is another great episode of WandaVision that may not reach the heights of the last one but still manages to keep things fresh. From its influence of Malcolm in the Middle to the revelations revealed in this episode, it sets up the next 3 episodes to be something huge. The wait keeps getting harder each week for new episodes!