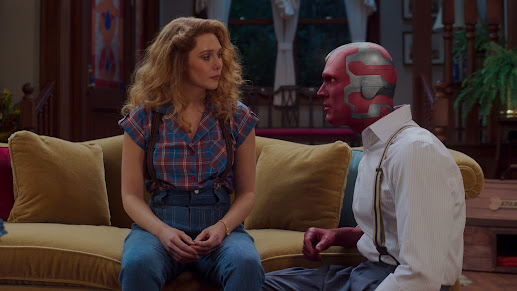 It goes without saying with this episode but it may just change the MCU going forward!!
“On a Very Special Episode” the latest WandaVison episode that is directed by Matt Shakman and stars Elizabeth Olsen, Paul Bettany, Kathryn Hann, Teyonah Parris, Randall Park, and Kat Dennings. The episode has Wanda addressing Vision's worries when he starts to grow suspicious of the neighbors' strange behavior and even his own reality.

It goes without saying that so far, the show has won me over in its first 4 episodes and has me waiting in anticipation each week for the new episodes and where the story could be going. Each week so far has brought new things to theorize and discuss which makes the wait for the newest episodes that much more fun. However, this episode managed to somehow raise the stakes in everything and simply put completely shatter everyone’s possible expectations for not just the show but the MCU going forward as a whole!!

After last week’s necessary deviation to the other perspective of the show, the episode immediately continues the story with an episode that this time mimics the 80’s in terms of sitcoms. It is visually immediately evident with the overall look that really gives it the look of shows of that era. This is also further enhanced by the hair and make-up styling that once again makes each episode so much more exciting. Once again, props to Matt Shakman’s excellent directing as he really is using the most of this story visually with each episode.

The best part of the episode is how many answers are starting to unravel in terms of the overall plot while leaving so much left to theorize. Within the first few minutes of the episode, what immediately caught my attention is when Agnes (Kathryn Hann) panics when things don’t go to plan and immediately utters “Should we go from the top?”. It raises so many questions like if the civilians know that they are being controlled by Wanda. This is later revealed when Vision briefly snaps out one of his co-workers out of his mind control and reveals that Wanda is in fact mind-controlling everyone. It shows exactly what Wanda is doing which is creating this reality for herself even at the expense of others. This is such a fascinating direction to take someone who we all view as a superhero and really break down what’s wrong with her which is a direction I’m excited to see play out.

What also further raises the stakes is what happens in the outside world when they are trying to figure out what is happening. Firstly is the perception of who Wanda is to other people as the lead person of the organization S.W.O.R.D perceives everything Wanda has done in the MCU as an act of terrorism. It’s interesting as the audience sees her as a flawed hero but others around her see her as an unstable maniac despite evidence proving otherwise. The biggest part is how the episode straight up reveals that Wanda took Vision’s literal dead body and revives him from the dead which further shows the extent to what Wanda has done.

This all alone would’ve made this episode a huge one as it furthered the story along and reveals so many answers. Basically, it could have ended 5 minutes earlier and the episode still would have been a great one. However, against all odds, Marvel decided to literally shock the audience at the end and literally change the MCU going forward! The episode reveals Pietro Maximoff coming back only it was not the one played by Aaron Taylor Johnson but, was Evan Peters from the Fox X-Men universe! I don’t usually freak out but it’s safe to say this reveal made me lose my shit in the best way possible! Evan Peter’s Quicksilver was always the highlight of the recent Fox X-Men movies as he managed to steal the show on each of his occasions. Safe to say, it was kinda sad when Marvel got the X-Men IP back since some of the perfect castings seemed to be lost. It is why seeing him return in the MCU is something that made me extremely happy as it raises so many possibilities for the MCU. It seems the MCU is heading towards a multiverse direction with the upcoming Spider-Man and Doctor Strange movie so having the multiverse potentially also bring in some of the Fox X-Men is something completely insane. This is all theorizing as there isn’t rn a clear idea if this is actually the Fox X-Men Quicksilver or just an alternate version of Quicksilver in general. Assuming this actually is the Fox X-Men, this brings in the possibilities in bringing back a lot of the perfect casting like Micheal Fassbender/Ian McKellen as Magneto and James McAvoy. Patrick Stewart as Professor X. This episode alone has me completely excited as a fan of where the MCU could go from this episode alone!

What else is there to say about this episode that wasn’t already layed out before. Not only is this an episode that reveals so many answers and raises the stakes for the rest of the series but also has expanded the possibilities of the MCU by shocking everyone! This episode alone has made me as excited for the MCU going forward as I was before Infinity War and Endgame which I simply could not have expected at all. The wait for the rest of the series has just become harder than it already was because this episode has managed to blow past all of the expectations I had before!
Labels: 2021 TV Written By Hussain Alokaily