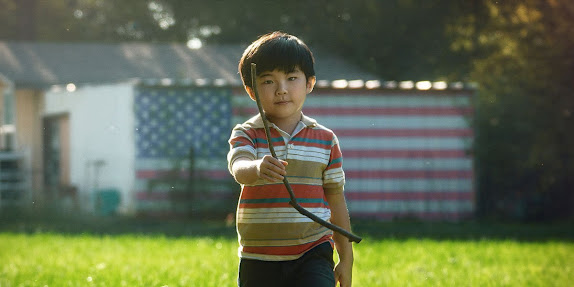 From studio A24, comes the story of a Korean family who starts a farm in Arkansas in the 1980s. A trying story that explores the relationship between the family as well as their struggles trying to live out the “American Dream”. So let’s go for a walk and get some water down from the... Minari creek.

The film stars Steven Yeun, of The Walking Dead fame (which I am a huge fan of), as the patriarch of the family. He is for the most part the lead character of the film, although, the true main character of the film, is the family unit. The family consists of the Matriarch (Yeri Han), the Grandmother (Youn Yuh-Jung), and the two children (Alan S. Kim, Noel Cho). The family unit is by far the strongest aspect of the film, as their relationships, dream, and aspirations are tested and put on full display. The authenticity comes when the troubles are shown while this family learns to adapt to this new environment. It is quite beautiful as this is a common thing amongst foreign families moving to a new place. The theme of “working hard to give your kids a better life” is explored heavily here as this was a huge risk for the family for their farm to succeed.

As you’ve been seeing with award show chatter, the acting in this film is phenomenal! Especially with Steven Yeun, Alan Kim, and Youn Yuh-Jung. Steven Yeun is given more to do and carried a chunk of the film. His character arc consists of the constant need for giving his family a better life and not taking “no” for an answer, even if he is not showing it in the nicest way, which was a common factor amongst most families who migrated to a different country in the 80s. Youn Yuh-Jung plays the not-so-stereotypical grandmother, she struggles to bond with her Grandson, David, played by Alan Kim, who is the breakthrough actor in this movie. The coming of age story with his character is the heart of this movie. The innocence and wonder behind his character make you care for the family and want the best for them. Alan Kim has a bright future ahead of him. The film also gets a surprisingly touching performance from Will Patton, who plays the helpful, religious neighbor. His character is not the usual “nice neighbor”, as he has some challenges and flaws presented. To add to that, all characters in this film have their perks and downsides, which truly shows the realism in these characters.

Lee Isaac Chung wrote and directed Minari (2020). This is Lee’s first major production, and it was an amazing start. While he has made a career in film for the past decade or so, this will be his big break. The authenticity with the characters and story will resonate with almost every person watching. The way Lee focuses on the emotions of the characters through dialogue and actions rather than spoon-feeding the audience what the characters are feeling is beautiful. The characters don’t express themselves through dialogue telling how they feel but dialogue showing how they are feeling and how they are affected by situations makes the audience relate to the characters. Alongside the amazing writing, was truly stunning cinematography. The greens that coincided with browns were pleasing and brings you into the farmland of Arkansas. The mix of languages may turn people off of the film but I’ll tell you, Korean is essential to the plot and characters. You won’t even notice as you’ll be so invested in the characters and story. Without getting into spoilers, the last act of the film is very emotional. The first half is a slow burn. Not tough to watch, just not very much happening. It all comes together and really hits you hard. It was a great conclusion to a great story.

As award season approaches, Minari will continue to receive plenty of well-deserved awards. This is one important watch. Fully recommend watching this as soon as it hits streaming services. You won’t regret it! This is a touching watch with stellar acting, a real story with great dialogue, beautiful scenery, and a message that will have you thinking for days to come.

Thanks for taking time out of your day to read! Much love. Always remember to Hold on to Hope.
The American Dream is much different from the movies, but the dream of giving your family a better life is as real as you and me. Be grateful for what you have and just remember who worked hard so you could have what you have. Cheers.

Special thanks to Elevation & A24 for a review copy of the film.
Labels: 2020 Movie Review Written By Alex Humber