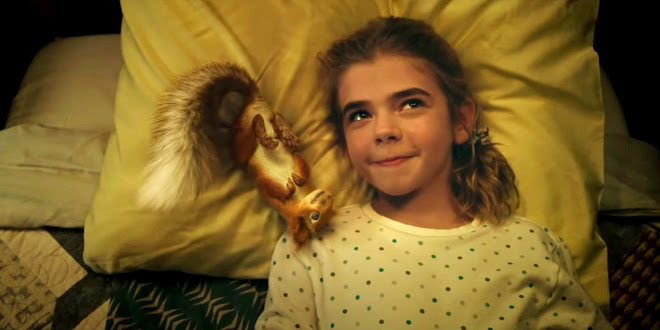 Now, I must admit I'm definitely not the target demographic for this, but I'd be lying if I said I didn't have a great time with it. Flora & Ulysses is the newest Disney+ original to hit the streaming service this week. The film stars Matilda Lawler, Ben Schwartz & Alyson Hannigan. It follows Flora, a 10-year-old comic book stan who discovers a squirrel which she names Ulysses. After discovering he has superpower skills, the two embark on various adventures with lots of fun along the way!

I was genuinely impressed with Flora & Ulysses. Going in, I was skeptical considering most live-action animal comedies go a specific route that's not so great, to say the least. However, F&U strays away from that archetype to create a really unique and heartwarming story. The film is set in a comic-like world. Flora's life revolves around them and her father George (Schwartz) is a comic book writer. There are awesome Marvel references left right and center and callbacks to certain comics & movies. It all works perfectly at establishing the universe and life our main ensemble has. But more importantly, how cool is it that Disney can now use their other properties across all their content now?! Pretty darn cool if you ask me.

The dynamic between Flora and the squirrel Ulysses is near perfect for a movie like this. I really like how Ulysses doesn't have a voice actor for the character whatsoever. The humor and charm are really effective in a way that doesn't rely on cheap fart jokes to appeal to kids. Also, the CGI for the squirrel super realistic! Some of the much better animal CGI I've seen be done in the past few years. The performances all around are perfectly good. Matilda Lawler is a great child actress and she has a bright career ahead of her for sure, whereas Hannigan & Schwartz continue to impress as they have done in the past.

But here's the important question at hand that I'm sure anyone over 11 is wondering. Will I still like it? Yup! Flora & Ulysses never stoops to the point of unbearable children's humor. There's some sleek little jokes here and there that only adults will pick up on, which is always great for adults. The film also deals with some hefty topics like family, loyalty, and love with its B plot, which could open up some nice discussions. That being said parents & adults, don't go in expecting the next Baumbach screenplay. It's predictable at many instances and you can sort of tell how it's going to all go down, but it never stops you from enjoying what you're given.

At the end of the day, Flora & Ulysses is a return to the golden age of Disney Channel Original Movies, even though this technically isn't one. Kids will love it, parents will be surprised at its efforts and it's the perfect choice for the upcoming family movie night.

Special thanks to Disney for an early review copy!