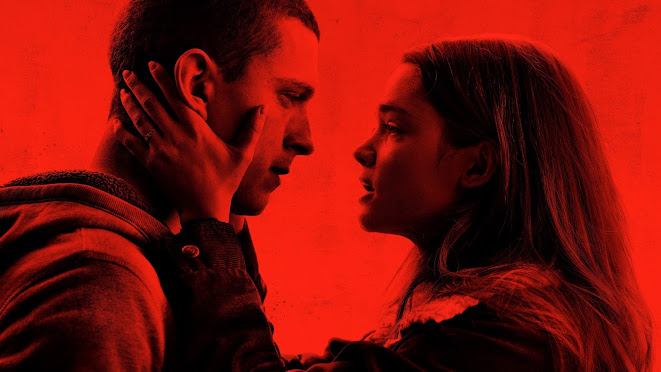 Is Cherry for Tom Holland the equivalent of Spring Breakers for Selena Gomez? Could be! Cherry is the new film directed by Russo Brothers Joe and Anthony. Starring Tom Holland, Ciara Bravo & Jack Reynor, the film follows the journey of Cherry. From college to the army, to eventually becoming a drugged-out bank robber, the trials and tribulations of a hard life are put on full display. Cherry is ballsy, bold, and quite bonkers. Let's get into it.
I guess the easiest way I can sell Cherry is by saying that it's 100% this generation's Forrest Gump. HEAR ME OUT. I say that because in recent years I haven't seen a film successfully portray such an almost unbelievable life so near perfectly. Cherry takes place from 2002-2021. A VERY long timespan just as Forrest Gump was. Furthermore, both films explore themes of love, war & drug abuse. While Cherry easily gets darker than FG, the parallels are so vivid the entire time (also both leads are named Tom, so there's that?). What's more interesting specifically is how Cherry modernizes this grand storytelling. The Cinematography is sleek, gorgeous, and super unique. Shifts in aspect ratio, impeccable camera work, and just stunning atmospheres make this such a treat for the eyes.
To be honest, Tom Holland hadn't really won me over with any of his past works, but I'm glad to say this sold me. Tom as Cherry was simply amazing. The film really allows for us to see a side of him that we haven't really seen before. Slowly, we watch the downfall of Cherry as his life begins to crumble around him more & more. With this, Holland's performance improves as it seems the lower Cherry gets the more interesting and captivating his performance becomes. Really, all the performances here are dope. Specifically, supporting performances by Forrest Goodluck as the junkie friend James & Cherry’s army buddy Jimenez played by Jeff Wahlberg.
The script here is nuts. Although the subject matter gets real dark real quick, there is always this underlying comedic tone to everything. There are so many moments throughout Cherry where you really don't know if you should be laughing in the best way possible. For a film that essentially has 3 mini-movies within itself, it sure knows how to keep a proper pace too. There's never really a dull moment with Cherry, even at a runtime of 2h20. The only glaring problem with Cherry is its final act. This is mainly where we see Cherry in the heist part of his life. Unfortunately, this robbery element of the story gets repetitive quickly. There doesn't really seem to be any high stakes until towards the latter bit and it does find itself in quite a cycle of Cherry doing literally the same thing over and over. That being said, everything else is too damn great to discredit the movie as a whole.
At the end of the day, go watch Cherry. No matter what, you will be blown away at the acting chops that Holland has outside of being MCU's "quirky" teen hero. Quite frankly, there's something for everyone with Cherry. A love story, a war story, a drug story, and a crime story. They may not all be as compelling as the others, but do they ever work wonders.
Cherry gets a 4/5!
Special Thanks to AppleTV+ for a review copy of Cherry
Labels: 2021 Early Review Movie Review Written By Jaeden Noel