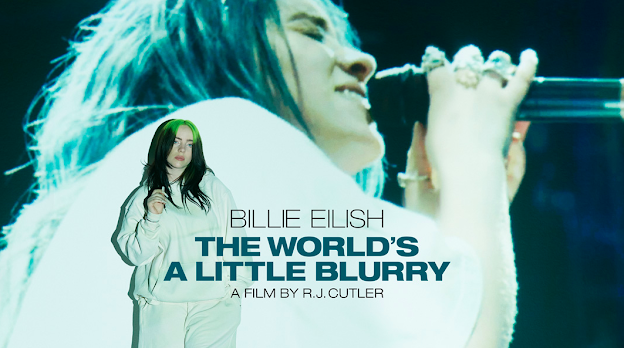 Love her or hate her, Billie Eilish is one of the most successful female artists in history. At such a young age, she's managed to sweep the Grammys at record-setting levels, have chart-topping albums, singles, and now, her own documentary. I for one, am a HUGE Billie Eilish fan so I was extremely excited to see how this doc would be. Apple's been on a doc streak recently with the works of Boys State & Beastie Boys Story. Thankfully, this streak continues with this masterpiece of documentary filmmaking, Billie Eilish: The World's A Little Blurry.

The documentary follows the life of Billie Eilish from right before the release of her debut album, When We All Fall Asleep, Where Do We Go (which is a masterpiece album too) all the way to her grammy sweep in February 2020. Throughout the film, we see the ups and downs of dealing with such fame and success at such a young age of 18. The documentary takes us on this journey with Billie as her fame excels to new levels throughout the lengthy 2hr20 minute runtime.

I think what I loved the most about this is how much this humanizes Billie. Director R.J Cutler puts us directly in the everyday life of Billie. Before the album released and the tour began, it follows her generally normal teenage life. Hanging around her brother & making music with him, getting her license, and dealing with her boyfriend at the time, Q (Which by the way Q, in the nicest way possible, fuck you. How could you treat her SO badly?). As her success grows post-release, the world she surrounds herself in only expands exponentially. As we follow her around show after show, moment after moment for almost a year, we get to see her grow as a person. The more you grow, the more problems come along with it. This is no exception for Billie as we truly get an all-access look at the genuine saddening problems she faces across her tour. Her development as a person dealing with this fame is showcased flawlessly, in a way that never villanizes or sympathizes with her. As I said, it humanizes her.

The documentary does an excellent job at pacing the doc by giving us almost a Hannah Montanna type look at the life she leads. As much as we see her on stage dealing with fame, we see her spending time with those who mean the most to her, her family. The dynamic put on screen between the 4 Eilish members is so raw, real, and authentic. You can tell that unlike many documentaries there is a very vérité approach to everything here. Did I mention the documentary itself is stunning? The cinematography on deck here is some of the best I've seen in any doc ever. Everything is so colorful and vibrant that you can't help but get lost in this ever-growing world we see roll out in the film.

There's only so much one can say when dissecting a documentary. Overall Billie Eilish TWALB excels in every field that a documentary needs to. Giving the viewer the gratification of having a fully fleshed-out journey that holds nothing back in such an uninterrupted, flawless way. That being said Billie could have 10 more documentaries worth of stuff to discuss and take a look at because let's be real, she's accomplished so much. Even if you aren't a fan or think of her as an industry plant pop icon (which in that case you're wrong), I highly recommend checking it out as this is truly a masterpiece in filmmaking alone.

Billie Eilish The Worlds A Little Blurry gets a 5/5!