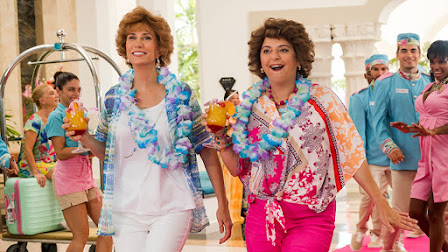 This is the best prolonged SNL skit that was never really an SNL skit. Barb and Star Go To Vista Del Mar is the new comedy film starring Kristen Wiig and Annie Mumulo. Also penned by the duo, the film follows two middle-aged golden gal's Barb & Star as they finally leave their hometown for the first time ever to embark on an adventure of a lifetime in Vista Del Mar. While there, the two get themselves in over their heads as they find themselves entangled in a villainous plot to wipe out the city.

Let's make one thing redundantly clear. Kristen Wiig and Annie Mumulo are two of the best comedy writers of the 21st century. Although they have only written two films together (this & Bridesmaids) these two titles alone solidify that top spot in the game. Barb & Star is a quirky, heartfelt & hilarious comedy that virtually everyone can get a kick out of. Pre-teens to pre-seniors will surely get a kick out of the film for endless reasons.

For starters, Barb & Star are two of the funniest characters in recent comedy. Their snicker-doodle baking personas are absolutely hilarious, surfaced and so damn accurate. Kristen & Annie crush it with their performance of the two leads in a way that I don't think many other actresses could. There's something so unique about the duo's chemistry & style that you simply can't help but applaud at how committed they are to these roles. Jamie Dornan plays Edgar, the man in charge of putting the extermination plan into motion. Who would have thought that he out of all people could be so damn funny? Dornan absolutely crushes his stooge esque role of a not so evil guy who just wants to be loved. The whole subplot of his works absolute wonders into the universe we're in throughout the film. The film also looks so damn beautiful. The cinematography is absolutely stunning thanks to its gorgeous color choices and setting. Everything feels vibrant, from the backdrops of Vista Del Mar all the way to the costumes, set pieces, and location. I'm also really glad they went with the PG-13 rating for this instead of R. It pushes the boundaries when it needs to, but quite honestly this kind of humor doesn't need to be drowned in raunch, and thankfully it isn't.

The only real glaring problem in Barb And Star is its runtime. The film does feel a little on the long side at some moments where it's not non stop comedy, but this is truly made up for considering how great everything else is throughout the movie. At the end of the day, Barb and Star Go To Vista Del Mar is a really great time. It has everything it needs to excel in the world of studio comedies and will surely find its audience growing in the upcoming weeks.