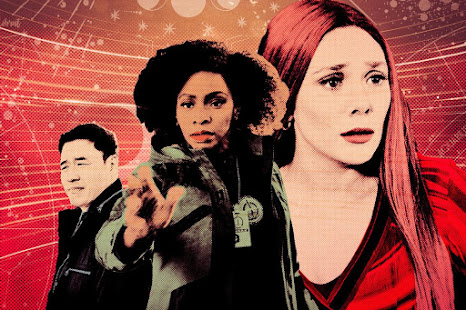 We Interrupt this Program is the latest episode of WandaVision that is directed by Matt Shakman and stars Elizabeth Olsen, Paul Bettany, Teyonah Parris, Randall Park, and Kat Dennings. This episode revolves around the events of what happened outside of the first 3 episodes as Monica Rambeau is tasked with a special assignment regarding sentient weapons and as of result goes missing.

The first 3 episodes of WanadaVision was such an excellent start to not just the next phase of the Marvel Cinematic Universe but also such an excellent start to what Disney + can provide for the MCU. The first three episodes did something so unique with the MCU formula and slowly built so much mystery to the overall plot of where the series would be going. It is for that reason I was super excited to finally see a new episode and this episode did not disappoint!

Note: Given the episodes will now drop at the same time everyone else gets to see them, Spoilers will be mentioned for the given episodes’ surprises and plot points.

The first thing that struck me in the episode was the cold open and how it recounts the “blip” of everyone reappearing and its introduction to Monica Rambeau as a character. The idea of the people who died in the “snap” in Infinity War only to “blip” back into existence after the events of Endgame always had me wondering what would happen in the normal world from the perspective of a non-superhero. It is why the opening works so well as it manages to capture the intensity of that moment through its camera work and direction so well. It also really captures the confusion and chaos of that moment that would happen if it were to happen in the real world so well.

From that moment, the episode kept surprising me as it’s a full episode of what happened in the outside world during the events of the first 3 episodes. It really starts to fill in the answers audiences have from the first 3 episodes and it fully sets up some truly exciting stuff for the next few episodes. The best part of the episode is how it reintroduces characters previously in the MCU in such a better way. Kat Dennings’s character “Darcy” is a character I never really liked in the first 2 Thor films as I found her character not that funny. However, in this episode, they find a way to make her more likable, funny, and more necessary to the plot. As for Randal Park’s character “Jimmy Woo”, He was fine in Ant-Man 2 but also could’ve been used better. In this episode, he is a much more nuanced and more likable character this time.

The most exciting part is the end of the episode as it really reveals what happens at the end of the third episode. As it shows Wanda being reminded how her actual reality and kicking Monica out of her house, it leads more and more to the idea that Wanda could be creating her own reality. This is reinforced further by the horrifying image of Vision’s deadhead from the end of Infinity War which lends more to that theory. Either way, this episode feels super important to set up what is supposed to be a character arc the leads to the next Doctor Strange film where she makes an appearance.

In conclusion, the latest episode of WanadaVision continues to show the insane potential this show currently has. In such a mind-bending episode it really starts to fully kick off this story that continues to promise something that has not been seen in the MCU. As the series continues, I’m already dying to see how this story continues further.
Labels: 2021 TV Written By Hussain Alokaily