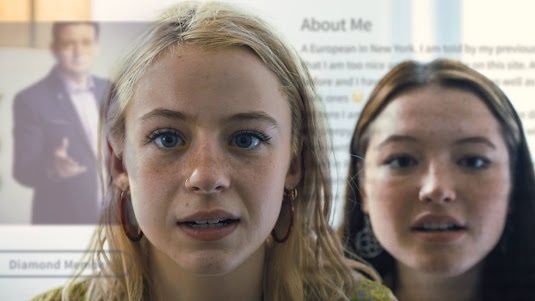 We're covering the 2021 Sundance Film Festival! This is one of many capsule reviews, interviews and other pieces that will be published here during and after the event. Check out our social media to be kept in the loop!

I'm sure all single people have had their share of experience on dating apps, especially during 2020 - a year where many felt more lonely than ever. It's easy to imagine many not wanting to be reminded of the various things that brought them pain over the past year. However, that is far from the mandate of this fantastic film. It's quite the insightful look into why we're drawn towards these apps, and uses some really effective & innovative cinematic techniques to let it stand out. It's the type of discovery Sundance is known for!

To begin, the style here is really cool! In the vein of narrative films like Slacker, this takes a vignette-like approach to its storytelling. We get to see each character, or group of characters, for a few minutes at a time. We get to watch them swipe through profiles, as the audience is put into the perspective of the device. This detail adds quite a bit of flare to the film, as we get a double-exposure, dimmed image of the app they're using over their faces. This is unlike anything I've seen before, and I commend director Pacho Velez for using such strong techniques to immerse us into the world of his subjects.

The structure really lets the film thrive as well! Each vignette lasts the perfect amount of time, and the audience remains captivated and entertained with each subject. It also allows for us to understand the subject matter from the perspective of various demographics, which really furthers the impact.

The only thing I wish I could say about this film is in regards to it's emotional impact. We never get too vulnerable enough with the subjects, or get to spend enough time with them to truly empathize with their need for love. However, this is still a truly unique and captivating cinematic experience that we don't usually get with these sit-down based documentaries. It's certainly worth your time, and it's a great example of how we can make optimistic, non-pandering cinema in the moment we're living in.

Sincere thanks the team over at Susan Norget Film Promotion for granting us screener access to this film prior to its Sundance premiere! It is currently seeking worldwide distribution, but we recommend you checking out the second Sundance screening on Monday, February 1st.