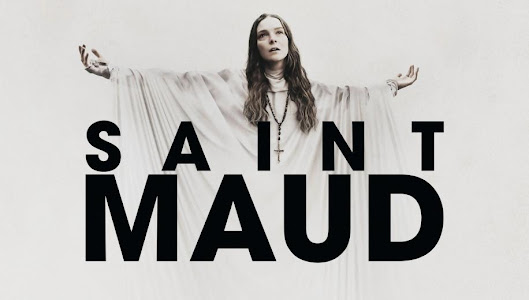 When every film slated to come out got pushed into to the never ending ether of TBA dates, Saint Maud was one of the many that hurt the most to see disappear. Luckily, after what feels like eons of waiting I finally got the chance to see the highly anticipated horror flick. Saint Maud is the new psychological horror film starring Morfydd Clark & Jennifer Ehle. Following Maud (Clark), a religious, nurse turned caregiver taking care of the terminally ill Amanda. As her faith grows rapidly, Maud begins to believe she is destined to save Amanda from eternal damnation no matter what.
Saint Maud starts off on a bang and takes no time to get the story going. With the little knowledge we the viewer know about Maud, we are taken on a journey that slowly uncovers glimpses of her persona. This slow burn works as quite possibly one the best character studies I've seen in recent memory. While Maud seems like a sweet preaching soul, deep down you can tell there is something strange at play. This works wonderfully thanks to a great performance from Morfydd Clark who has the potential to be the next Florence Pugh. Jennifer Ehle as Amanda also delivers way more than I expected with a great performance that works perfectly off of Clark.
The film is pretty darn spooky too. Everything from the cinematography to the sets shout creepy. Constantly sending a chill down my spine, that feeling never really goes away knowing that things are bound to hit the fan sooner than later. It does a really great job at keeping that tension at an all time high in a way that not many horror films are able to do. Once the third act came around, some truly terrifying imagery hit the screen and a-lot of bonkers stuff happens to the point where my jaw was almost dropped...BUT THEN IT JUST ENDS!
Going in to Saint Maud I knew it was a relatively short film, it flew by if I'm being honest. But I didn't mind because it was going so well. To say the film didn't satisfy me would be a lie, but I simply couldn't believe that this was all there was to this extremely interesting story. Knowing what it could have been and where it could have went, I ended up feeling that this was a little underdeveloped and could have had some more work done in the screenplay area. I wanted to know more about Maud, more about Amanda & even more about some of the supporting characters. There was so much to explore with it's themes about religion, delusion and insanity that would have made it 1000x better. I really wish it was 1hr40 instead of 1hr26. But of course, I can't control that and evidently what we are given works to the extent it needs to in order to be a solid effort that I still had a good time with.
At the end of the day, Saint Maud will be a great time for the majority of people. It does what it needs to do to be successful but ultimately could have been something much bigger. For those like myself who immediately get sucked into stories like this that crave the larger picture, you might just find yourself desperate for more, which we surely won't be getting. That being said, it still makes for a solid worthy viewing.
Saint Maud gets A 3.5/5!
Special thanks to everyone who's been supporting us so far. Be sure to follow us on twitter @dudeiwatchedtht and be on the look out for more content coming soon!
Labels: 2021 Early Review Movie Review Written By Jaeden Noel