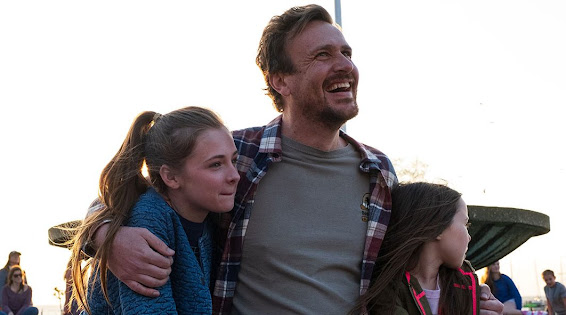 A story told with three people; a couple and a very close best friend. After the couple receives tragic news, their best friend puts his life on hold to provide support for them. How can someone put their life on hold for us? In that situation, we will forever be grateful from the support from... Our Friend.

Gabriela Cowperthwaite became notable when she directed the infamous and chilling documentary, Blackfish (2013), which tells the story of the controversy surrounding the captivity of Killer Whales. The movie was a critical success and boosted her career. Four years later she took a stab at directing her first feature film, Megan Leavey (2017). The film was received well by critics and audiences alike, but, sadly, is said to be severely underrated. Now Gabriela brings us her third theatrical film in, Our Friend.

The film premiered at TIFF in 2019 to praise. Sadly, it took 2 calendar years for the film to be released to the public. The film stars Casey Affleck as Matt Teague, a semi absentee father that comes back into his wife’s (Dakota Johnson’s) and children’s lives after receiving life changing news. A friend of Nicole (Dakota Johnson), Dane (Jason Segel), drops everything in order to help out the family through these trying times. In this non-linear story, the audience is subjected to great acting, character growth, bonding and touching moments. The film is based off a true story, which I recommend reading after you’ve watched this movie.

Let me start off by saying, what a shame... what a shame this movie is not getting the awards and press that it so much deserves. This is a heartbreaking and beautiful film that has three stellar performances, a genuine screenplay and a director that cares for their films.

This was my first feature from Gabriela Cowperthwaithe, and after seeing this movie, I am very much anticipating watching her other works! Brad Ingelsby wrote the movie. He previously wrote: Out of the Furnace (2013), Run All Night (2015), and The Way Back (2020). I am personally a fan of his work, enjoying all three of the movies listed. While his films have not been HUGE critically acclaimed films, they are all serviceable and written well. Our Friend (2021), is definitely a frontrunner for his best screenplay. I think he has found his niche of “feel good” movies that could actually partake in reality.

With a stellar cast, you’d expect there to be one singular performance that stands out among the rest, and while this movie had that with Jason Segel, the rest give him a run for his money because all three leads in this movie give award worthy performances. Casey Affleck is currently off his high of awards after his amazing performance in Manchester by the sea (2016), which was a personal favourite of mine. I, for one, think he gave the best performance of the 2010’s with that movie and was very deserving of that Oscar win. While this is a different type of performance, it feels Casey has brought similar vibes over from that performance. That is a compliment to say because Casey’s performance here involves a man dealing with issues out of his control but must step up and take action. Casey’s character, I would say, has the most character growth in this film. While not drastic, the growth is subtle and not shoved in your face, which I very much appreciated. Casey has shown time and time again that he is a stellar actor, and this movie only drives that point home.

Dakota Johnson has had her fair share of flood throughout her career, which pleases me to say she did really well in this movie. She is the forefront of all these character’s actions and decisions. She has some pretty heavy scenes to act in. She does a great job embodying a person going through this horrible scenario and I believed her as this mother. Of the three, she was maybe the weakest, but I’ll be damned if she didn’t make me tear up in some scenes. I’m very happy to see her in these types of roles because she has the talent, she just needs the right scripts.

Now for the best part of this movie, Jason Segel. Jason plays the friend that supports the family throughout this hard time. Jason showed that he had serious acting chops when he started alongside Jesse Eisenberg in The End of the Tour (2015), where Segel played David Foster Wallace. Segel showed that he can do serious dramatic work, not just comedic. With Our Friend, Segel provides a mixture of comedy and drama into his performance and it works very well. Segel’s character was the true heart and soul of this movie. The way his character holds all this regret and negativity while trying to stay positive really breaks you down. Jason Segel will sadly (most likely) be this year’s biggest awards snub. Also, a shoutout to the two daughters in the film. The kids acted extremely well and did not feel like plot points but actual characters.

Back to director Gabriela Cowperthwaite. I would say this, she did a fantastic job here. She has some real talent as a director and should be getting more work! She allows her actors to breathe and provide real moments in this film. She also allows for the camera to hold on an actor which shows she has faith in them to perform the scene without needing “sad music” or jumpy edits.

The thing about this picture that I adored the absolute most was the treatment of the audience. There are some heavy and dramatic scenes. Those scenes however, do not have sappy music or the typical dialogue and screaming cliches usually involved in these types of movies. This allows the actors and script to handle the emotions without all these other elements. What I’m trying to say is these touching/heart wrenching moments in this feature are all natural and do not feel manufactured. That is the biggest compliment I can give this movie.

If I must nitpick, the run time felt a bit too long and could use some trimming, but that’s not an issue at all. This movie was nonlinear and honestly felt a bit confusing at first, though once you understand the pacing and what the film was trying to say, then it becomes less of an issue.

While only my second watch of the year, this will be a hard film to beat. This movie was amazing; from the stellar directing done by Cowperthwaite, to the great cast giving stunning and heartbreaking performances, to the real and authentic writing. This movie was a pleasant surprise that should be a must see for everyone!

Thanks for taking the time out of your day to read my review! Greatly appreciated and remember you are loved! Hold on Hope.

A genuine and caring friend can sometimes be all we need in life. Someone who is there to help us through our lowest lows and celebrate with us during our highest highs. The fact that this was a true story gives us hope that there are truly good people in this world and can help us find... Our Friend.