One Night in Miami (2021) Movie Review (Written by Alex Humber) 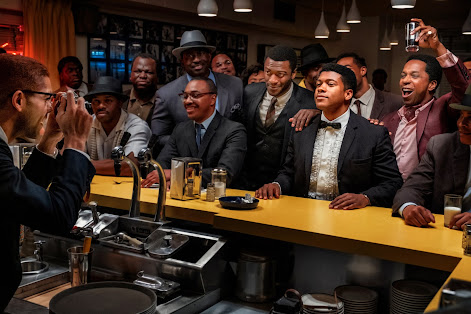 What would happen if four African American icons of the 1960’s (Sam Cooke, Muhammad Ali (formerly Cassius Clay), Malcolm X and Jim Brown) all met up in a hotel room to discuss their part in the civil rights movement happening, One night in Miami...?

Based on the Stage Play by Kemp Powers (who also was the screenwriter for the latest Pixar film; Soul (2020)), and brought to life by director, Regina King, One Night in Miami... has been a critical success with the film being nominated for many awards and even gathering Oscar buzz. The film follows the four most iconic African American men of the 60s having a fictional night in Miami where they discuss their future, past and everything in between. From the stellar acting, to the astonishing writing, to the well done direction, there is just one question... is it worth the praise?

Before we get into the core of the film, let’s start out by talking about the standout... Regina King. King won an Oscar for “If Beale Street Could Talk” from 2018. Instead of jumping into a billion roles after her Oscar, she decided she would take a crack at a full feature length theatrical film. King had previously directed episodes of several Television series dating back to 2013. She had even directed a couple TV movies. Would her theatrical directorial debut flop? Well it pleases us to say that Regina King did a swell job with this movie. It was a great first feature that proves she has talent in front and behind the camera. This does come with some downsides. For example, the average viewer may be able to tell this is her first feature. As King learns her directing styles, there will be trial and error. There were some elements in this feature that honestly felt like a TV movie, while it may be a minor issue, it can take the audience out of the moment. Regardless of the fact, Regina King has a bright future ahead as a director.

On a lighter note, Kemp Powers came out of the trenches firing away. He came out with two critically acclaimed films this year. The fact that both of the films he wrote have been receiving this much praise, proves he has talent and is someone to watch out for! Kemp wrote the original stage play AS WELL AS the film adaptation. Kemp does a great job capturing the dialogue and actions of the four acclaimed men as well as the time period. The scenes where the four men are talking, all feel like this could have been a real conversation these men had. Although Powers does a great job with 90% of the film, there was a portion that honestly did not sit right with me. Whether or not this was accurate to the actual person or exaggerated for effect, Malcolm X (Kingsley Ben-Adir) in this film had some issues. While it is no doubt the real Malcolm X had a huge impact on the civil rights movement, the persona depicted in this film was a bit hard to root for. The actor portraying Malcolm does a stellar job and whether or not it was a decision made for effect or was in fact extremely accurate, it just did not sit right with me.

The four men all have their fair share of scenes, dialogue and character growth. At the forefront is mainly Muhammad Ali and Jim Brown, and sadly a very underused Leslie Odem Jr has much less screen time and dialogue compared to the other three. While it is great that Leslie is getting Oscar buzz, it is a shame we did not get to see more of him. The differing ideologies explored were very interesting to hear about. Malcolm and Jim being polar opposites and engaging in dialogues during the film were interesting to watch and while the audience gets to choose which side they prefer, both sides are treated with care and provide valid justifications for choosing either side. All four men do an amazing job with their performances. As stated, Leslie Odem Jr is getting deserved Oscar buzz for portraying the likeable and upbeat Sam Cooke. Odem does a great job with portraying him. The mannerisms are spot on (which can be a discussion point for all four men). Eli Goree plays Muhammad Ali, who portrays him as a cocky, goofy, smiley man. Muhammad provides the comedy and a light hearted break within all the seriousness of the conversations. Finally, we talk about Jim Brown. Jim Brown was played by Aldis Hodge, who is sadly getting shadowed by Leslie Odem Jr in the awards circuit. Aldis Hodge plays an extremely accurate and astonishing portrayal of Jim Brown. The dreams he has, the emotions being held back. Aldis Hodge was a personal favourite in this film.

Now that we discussed the good and the bad, we must now look at if the movie deserves all the critical acclaim. Personally, while I enjoyed the movie, I was left a bit disappointed. The movie felt like it had no stakes as well as little substance and felt like a semi cheesy “what if” episode of a TV series. While I very much appreciate the film and was very glad I watched it, I just was left wanting more! Everything the film has been acclaimed for is all worth the hype. From Regina King, Kemp Powers, to the four leading men, all are very much deserving of the acclaim. The film does become a bit forgettable though. The film does not really challenge the viewer (outside some very riveting conversation), and that can be a plus or a minus. Another common criticism is the cinematography. The cinematography (while far from terrible) lacks character and just feels like a person with the camera watching them. There were some pleasant shots that captured the essence of the time period so that is not to say the cinematography was “bad”. Nothing in this film was bad, the only true criticisms are minor and are followed by “good but could have been better”, which is a great thing to say. This shows the film got what it sent out to achieve and did not insult the audience or the real life men being portrayed.

I will personally rate this film a 3.3/5 (C+). Thanks for taking the time out of your day to read my review! Greatly appreciated and remember you are loved! Hold on Hope.

It’s a shame that this is a fictional story because an actual conversation between these men could have been groundbreaking and would provide a great story of One Night in Miami...
Labels: 2021 Movie Review Written By Alex Humber