On The Count Of Three (2021) Sundance Review: (Written By Jaeden Noel) 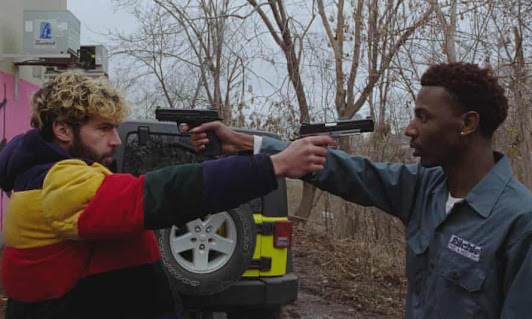 “Two guns. Two best friends. And a pact to end their lives when the day is done.” That's all really one should know going into On The Count Of Three, the directorial debut of Jerrod Carmichael which recently premiered at the Sundance film festival. The film also starring Carmicheal and Christopher Abbott is essentially a bleak mix of dark comedy and hopeless emotion that grips you into the film immediately. I really don't want to give too much away, as I believe Sundance marketed this PERFECTLY with the one still above & a small description as the only prior knowledge going in.

On The Count Of Three is an intense, heartbreaking emotional rollercoaster where the stakes are consistently at an all-time high. Every sequence, every decision, and every moment is so fragile and risky to the point where you slowly realize, all hope is gone. Especially for Kevin, played by Christopher Abbott who now has a 3/3 track record (Possessor, Black Bear & This). His performance is so raw, real and at times terrifying playing the unstable Kevin, who's set on taking care of "business" on his supposed last day alive. Jerrod Carmicheal as Val bounces off of Abbot so well and the two have this odd chemistry that works wonders. Carmicheal's comedic relief is so unique in the sense that you don't know if you're supposed to laugh or feel bad. Jabbing at Kevin's emo white boy persona throughout the film, it creates a strong sense of self-awareness for what it is.

I've never had a film impact me as much on first viewing as On The Count Of Three did, it does such a magnificent job at conveying the emotions of these two troubled men. The decisions they make throughout the film may seem cruel on the surface, but for them, it simply doesn't matter. The world has done them dirty, so it's only right they dish it out one last time. I'm sure we've all felt like that at one point or another. Not even in a suicidal context, but one where we simply just think to ourselves "Fuck the world and everyone who wronged me". Or in a situation where we simply think revenge is the one way to make things better. The film virtually lets these characters go ahead with these feelings, but in a way that ultimately becomes a reality check. I truly think this film is going to help a lot of people dealing with a variety of issues.

If I could convey anymore analogies or comparisons to sell you on checking this out, this would be the best one: What if Dante & Randall from Clerks were sick of their mundane lives and wanted to leave them forever. What would they do, where would they go? I guess we finally have our answer.

This isn't the last you'll be hearing from me regarding On The Count Of Three. When this gets released fully, I am going to deep dive this from start to finish talking about every single decision, and moment in this that had me yelling at my screen, laughing & then immediately sad afterward.