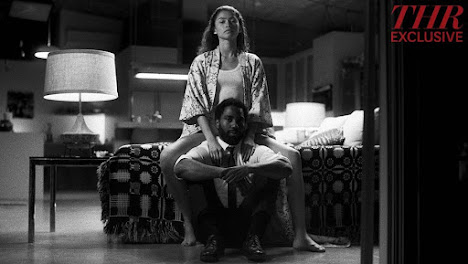 Premiering February 5th, 2021 on Netflix, Malcolm & Marie is a film that unveils the depth of a ‘real’ romantic relationship. That being said, if you are looking for a love story, this picture is far from it. Stated in the trailer as “the story of love” and “not a love story”, the film engulfs the audience in the complexity of a long term relationship standing on unspoken faults, feelings, and regrets, dragging its viewers through discomfort and humour all within one hour and forty-six minutes.

Written by Sam Levinson, the film follows filmmaker Malcolm, played by John David Washington, and girlfriend Marie, played by Zendaya, returning home after attending the premiere for Malcolm’s new movie. While the couple awaits reviews from the screening, what appears to be minor complications arising from the event unravels into a series of explosive arguments. As the evening goes by, deep-rooted issues within their relationship are revealed.

Arguably, the plot tells a story relevant to the ups and downs of modern romance; lovers that have long been comfortable in their toxicity. With Marie consistently placing herself as a victim and Malcolm taking a defensive position against her accusations, the characters' layers are stripped away with a war of words that progresses through the evening over tears, laughter, and Mac & Cheese.

Although Marcell Rév’s choice of classic black and white cinematography could be perceived as a risky choice for film viewers of the 21st century, the theme is set for the film perfectly reflects the starkness of the emotions displayed by the characters; the darkness of the arguments, the light of the common grounds, and the greys of the situation.

The performance delivered by Zendaya (Marie), who is the youngest woman to win an Emmy at age twenty-four in the category of Best Drama Actress for her 2020 performance in Levinson’s Euphoria, reminded audiences of just how deserving she is of the award with another stellar performance. On the other hand, co-star John David Washington (Malcolm) proved to be deserving of a drama award himself. Displaying a range of emotions, from screaming with rage to deep intimacy within a matter of seconds, the chemistry of these two actors create compelling characters with such detail that it is easy for the viewers to forget they are merely watching a film, thus setting the bar high for other actors and films in 2021.

Overall, Levinson’s Malcolm & Marie is a must-watch, especially for viewers seeking more than a romantic cliché. After indulging in the story of a couple’s frustration, laughter, and realizations, with outstanding Oscar-worthy performances from both actors, it is safe to say this is a film that has earned a rating of 5/5.
Labels: 2021 Early Review Malcolm And Marie Movie Review Written By Kim Ortiz