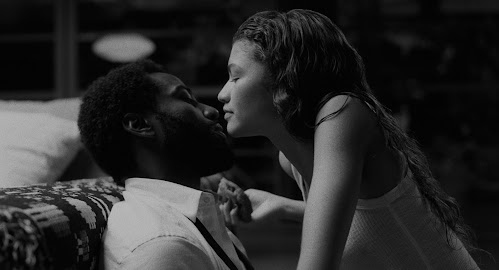 Malcolm & Marie is the new film by Sam Levinson and it stars Zendaya and John David Washington. The film takes place all in a single night as a filmmaker and his girlfriend return home from his movie premiere, they have smoldering tensions, and painful revelations that push them toward a romantic reckoning.
When it comes to the best filmmakers working right now that not as many people are paying attention to as much as they should, no other filmmaker comes screaming to mind as much as Sam Levinson. Levinson is one of the most visionary directors working today as he has a bold, unique way of visual storytelling that is simply unmatched to others around him. Levinson first came to my attention with the film Assassination Nation which is a fantastic film that showed how striking of a director he is. Then I saw all of Euphoria which showed once and for all what kind of a talent Levinson is. So when it was announced that Levinson secretly shot a film during the Covid-19 pandemic that starred Zendaya and John David Washington, my excitement went through the roof. I thankfully had an opportunity to see the film and it left me speechless when the credits rolled. Malcolm & Marie is a marvel of a film that shows that Sam Levinson is truly the next big filmmaker we have!

I don’t usually start reviews like this but regarding the fact that the film is entirely carried by the 2 characters in the film, the performances in the film from both John David Washington and Zendaya are both career-defining performances! Both Z and Washington are extremely talented actors in their works beforehand but Malcolm & Marie delivers performances from both actors that nobody knew they had in them. They deliver performances full of passion, subtly and raw intensity to fully makes their characters and the context of their relationship come to life. It truly makes the audience feel they know the characters full-on and adds to the intimacy aspect of the film.

What helps the performances is the script that Levinson wrote which is simply a beautiful piece of writing. The fact Levinson only started work on this script as the pandemic started and wrote it within a week is mind-blowing considering what he delivered here. The story takes place all in one night yet it always finds a way to keep the story fresh and not load too much heaviness at once. The characters are so fully realized and feels very personal to Levinson which enhances the story further. You get a deeper meaning from the relationship, struggles which drugs, and even an inside look into a filmmaker and what sudden fame can do to them. It explores so much of those aspects listed which makes the story that much more relatable to all viewers regardless of their knowledge of the film world or not. For me especially, the aspect of a filmmaker and sudden fame really touched me as it was interesting to explore a filmmaker who’s maybe a bit too far into his own head.

Something that also makes the writing that much better are the multiple monologues present in the film which is the dream of both writing and material for actors to perform in. The many monologues of the film contribute to both characters in the story as the monologues give so much true depth and insight into the characters and their pain with each other. Think of the climatic argument scene in Marriage Story but instead of one pivotal scene, there is multiple of them scattered through the film! The best aspect of the writing overall is how the movie doesn’t make you pick sides between both characters as they are both equally flawed individuals which makes the story that much more engaging.

The thing that makes this all come to life is Levinson’s work as a director which is awe-inspiring. Levinson faced the huge challenge of filming a movie about intimacy in a time where pulling that off is harder than ever before and the madman pulled it off. It’s odd that the Covid-19 protocols helped enhance the direction as Levinson pulled some shots outside through windows yet made them fully dynamic and interesting to watch. Levinson makes a story where most of the time 2 characters are talking and managed to make it fully visual through his approach to framing and camera work. It really makes the viewer feel they are a fly on the wall into 2 characters’ lives. The creative decision to shoot the film in Black and White also helps in making the visuals come to life by creating a unique look through framing and even it’s the production design.

Overall, Malcolm & Marie is the late in the game Oscar contender that everyone has been waiting for. Through its stunning performances, filmmaking, writing, and cinematography, Levinson has created a film that left me speechless throughout and has left me thinking of the film for days. It is work like Assassination Nation, Euphoria and now Malcolm & Marie which proves why we need more unique voices to take bold swings with the films they make and create something audiences haven’t quite seen before. It’s simply awe-in spring to see the work Levinson does as it only reinforces the dreams of many filmmakers to see original work make it to the screen.