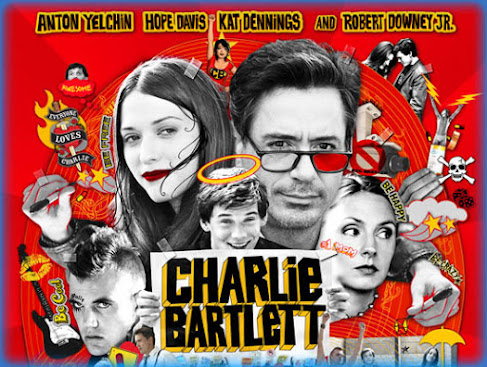 Ever since the concept of new releases have been Thanos snapped out of existence, I've been taking it upon myself to check out some older flicks that have been on my watchlist for way too long. Last night, I finally checked out the 2007 coming of age film, Charlie Bartlett. The film stars Anton Yelchin, Robert Downey Jr, and Kat Dennings & is directed by Jon Pol. It follows high school student Charlie Bartlett, a young boy who has been kicked out of every private school he's attended and now has to deal with trying to fit in at public school. He does this by taking on the role of student psychiatrist and helping other students with their mundane problems.
I really enjoyed Charlie Bartlett, it was a sweet & funny film that deserved way more attention than it received. Yelchin is great in the lead role as Charlie & is quite possibly my favourite role of his. More than anything, this is a fish out of water story that any one could relate to. Charlie may simply be a preppy jokester starting school life in a new environment, but the feeling he has of simply being an outsider is something I'm sure all of us have dealt with at least once in our lives. It's also cool to note that the film was shot in Toronto & likely at the same school Degrassi TNG was shot at. I say that because the amount of Degrassi cameos in this movie are insane! Jake Epstein, Lauren Collins & even the ChampagnePapi Drake himself show up a couple times throughout the movie. Supporting performances from Kat Dennings and Tyler Hilton are also pretty good. Their distinct personalities make for some great on screen chemistry throughout the film.
Robert Downey Jr. plays Principal Nathan Gardner in the film, a man who suffered from alcohol & drug abuse in his past. The film really digs deep into these themes and are very reflecting of RDJ's actual life which was very interesting to see. The screenplay was interesting but sadly suffers from some pacing problems in the middle of the film. It felt like I was at least an hour into it but upon checking I realized I was only 30 minutes in. Having such a fast paced first act made the second & third feel very slow at times, but it didn't bother me too much just because I was having quite a good time watching.
If there's one thing I can give props for however, is how realistic the high school dialogue is. In most high school based movies, there's either non stop profanity or simply none at all. Charlie Bartlett manages to find a proper middle ground making it sound almost reminiscent of how myself and colleagues talked back in our high school days. It also manages to get pretty dark, dealing with themes of drug abuse, teenage problems, feeling alone, suicide & hopelessness, which is something I really wasn't expecting going into it. Nevertheless, it did very well with the subject matter at hand making for some really emotional moments throughout.
At the end of the day, Charlie Bartlett isn't going to turn heads and have a huge resurgence anytime soon, but it was definitely a under-appreciated movie that I truly think more people should seek out. It is a little hard to find nowadays, but DVD copies of it are insanely cheap on Ebay.
Charlie Bartlett gets a 3.5/5!
Labels: 2021 Movie Review Random Review Written By Jaeden Noel