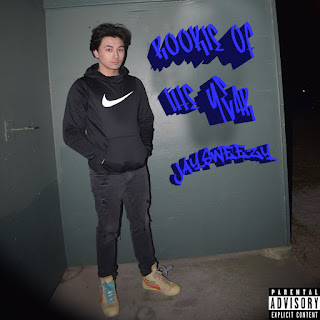 I AM NOT FANTANO
Local artist JaySweezy has officially claimed 2020 as his year. The Milton native coming from my hometown has managed to keep the city on its toes with recent releases such as his EP Know Me Now and  the now vaulted EP Sub Me In. To spread some holiday cheer, he dropped his first full length album,   Rookie Of The Year. This is easily Sweezy's most creative project yet so lets get into it.
The album starts off with the intro dubbed "Guitars In My Head", a melodic catchy track that sets a tone for the rest of the album. JaySweezy plays around with different vocals showcasing the creativity coming out from the project. Even an XXXtentacion style voice over appears on the track that helps flow into the next song, New Tears. The lyricism is all there, along with that same catchy hook. Let's just leave it at the fact that Sweezy excels in the hook making field so I'm not repeating myself here for every song.
Tracks 3 & 4 are the two lead singles of the album. Line Of Fire & Rockstar Livin'. Simply put, both of these are absolute bangers. Both of these tracks have all the potential to blow up overnight, virtually outshining everything else on the project. That's not a bad thing either, they're just that good. That being said, if you are going to listen to Rockstar Livin', I highly recommend listening to the single version instead. A few changes to the production on the album version simply don't compare to the OG version and in my opinion take away a lot from the great beat.
Whole Lotta Red? Nah, whole lotta features. the next 5 tracks all feature Milton locals such as Sado, Raizo & Shae. Snakes In The Grass (featuring Shae), has Sweezy with a new hard hitting flow backed by a dope verse by Shae. From The Start (featuring Raizo) also presents a whole new lane for Sweezy to go through, but Raizo ultimately steals the show on this one. Coming in with a Bladee/Yung Lean style, it shows the potential he has & at the end of the day, even if it's not his album, we love to see locals working together. All Angles (featuring Sado) is also a standout for the album. Sweezy and Sado are a deadly duo on this one, showcasing Sweezy's "spit-ability" coming in with glimpses of Eminem type delivery, while Sado murders the track with his dope bars.  My favourite track however has to be Mike Amiri (featuring Jat). Another deadly duo on the track almost playing out like a ying yang. Sweezy puts out some bouncy bars backed by a great beat, while Jat's verse will have you getting hyped up anywhere with a hard MC delivery.
The only real thing that stands in Sweezy's way with this project is the production itself. There's easily alot of room for working on the mixing & mastering just to give everything that golden touch. That being said, it never detracts from the overall experience. It would also be nice to see less features, not because they are bad because thats not the case, but rather because it would give Sweezy the ability to in the simplest terms, show off more.
At the end of the day, Rookie Of The Year is great. I highly recommend this album for virtually anyone. It's a light listen, perfect length and on top of that you're supporting a local artist on the come up.
Rookie Of The Year gets a 4/5!
Be sure to check out JaySweezy on ig @JaySweezy where you can see what he's got cooking, and of course be sure to stream his already expansive discography on ALL streaming platforms.
Labels: 2020 Music Written By Jaeden Noel