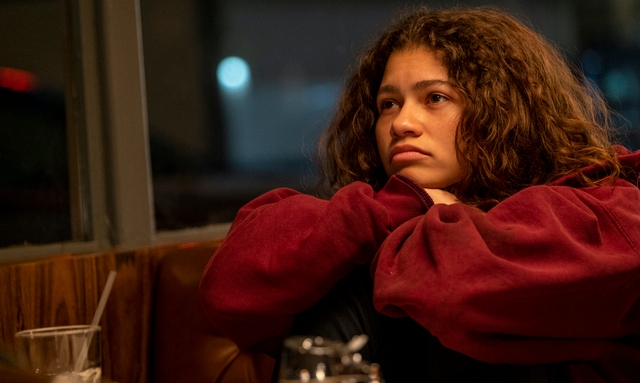 Euphoria: Trouble Don’t Always Last is a new in-between episode of the HBO series directed by Sam Levinson and starring Zendaya and Colman Domingo. After being left by Jules at the train station and relapsing, the first special episode follows Rue as she celebrates the holiday of Christmas. Rue’s relapse into drugs leads her to experience euphoria as never seen, and delves into the happiness experienced by Narcotics.

Euphoria is something I discovered in quarantine and I ended up finsihng the season in 1 day. The show transcended what I thought a TV show can be with it’s incredible direction, cinematography, performances and writing. It’s definitely a show that inspired so much creativity in me as a creator. Unfortunately due to Covid-19, the second season was delayed but Sam Levinson decided to use the pandemic to make 2 in-between episodes of Euphoria to hold over till the second season. Thankfully, the episode delivers and it’s the most raw, emotional and incredible hour of TV i’ve seen in sometime.

One thing that really inspired me about the episode is how much restraint there was in terms of the directing. What I loved about Euphoria was how stylish the directing was with it’s bold camera movements and edits and in this episode, there’s more control instead in terms of directing. IT results in the perfect style for this particular episode as it’s creates an intimate feeling between the audience and the characters in an episode that is just a conversation. Covid-19 restrictions are very present in this episode but it is used to really enhance the story telling rather then it actually being a restriction. Even with less bold camera movements and coloring, the episode still manages to have incredible cinematography and lighting.

The best part of this episode is how raw and intimate it gets. 90% of the episode is just Rue and Ali talking about drugs, life and their hardships but it does it really allow an opportunity to get a deep dive on both characters and what motivates them. The dialouge here is completely riveting as the conversation present are nothing short of deep. It gives so much character development to Rue as a character but it comply changes how the audiences see the character of Ali. In Season 1, Ali had a presence but this episode really allows his character to come fully to life as he’s now become one of my favourite characters in the show. Zendaya proves once and for all her Emmy win for the first season was not a fluke as she gives so much vulnerability in her performance. However, Colman Domingo completely steals the episode with such a subtle performance he gives.

Overall, while it may not enhance the plot of the show, the episode was the perfect reminder of what made the show so special in the first place. It manages to bring out the best elements of Euphoria while bringing in so much more nuance to the characters and building upon the first season. It may be a episode that is really deep in terms of emotion but it also gives a great glimmer of hope which is something needed in this world more then ever.
This episode of Euphoria gets a 5/5!
Labels: 2020 TV Written By Hussain Alokaily