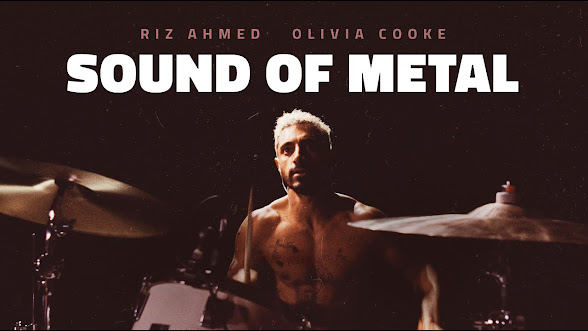 With Mogul Mowgli & Sound Of Metal both on the circuits this year, this is one physically painful year for Riz Ahmed's characters. Sound of Metal sees Ahmed in the main role of Rueben, a drummer who begins to lose his hearing and must come to terms with this new sad reality. The film, directed by Darius Marder, also stars Olivia Cooke & Paul Raci.
Being a drummer myself, the possibility of damaging my hearing is something that always circulates my mind. I know I would not be able to accept it, and neither would most other people. That's what makes Sound Of Metal such a hard hitting, raw and emotional watch. Riz Ahmed gives a stellar performance as usual that is bound to drain you of every emotion possible. Fear, sadness, happiness, & anger are just a few of the emotions that you'll have watching Rueben go through this heartbreaking journey.
Viewer beware, the film doesn't necessarily emphasize on the heavy metal drumming aspect at all. Rather then being a consistent plot device, it's more so used to establish Ruebens character as a hardcore person. The drumming works as a juxtaposition of how Ruebens life went from being off the walls loud to silent within an instant. Is this a problem? Absolutely not. What we are given is a intricate progressive story that presents this transition from a loud heavy lifestyle to one cursed with silence. The amount of detail that went into the film to properly portray the life of a non hearing person is applaudable. Even going as far to include an array of cast members who use ASL & non verbal lifestyles to properly portray these types of characters.
The sound mixing in the film is off the charts amazing. If it doesn't win the Oscar then I don't know what will. The way the audio virtually puts you in the hearing position of Rueben is mind-blowing. Watching the film with over the ear headphones on full blast is an essential. My only wish is that the film stuck with this audio format consistently, especially towards the final act of the film. It tends to hop back and forth which sort of takes away a lot of the ability to feel what Rueben feels.
The supporting performances are great. This is easily Olivia Cooke's best performance since Me, Earl, and the dying girl, although I wish she did get more screen time as it felt at moments they kind of threw her to the side. Who truly stands out however, is Paul Raci as Joe. His performance is powerful as hell and I genuinely hope he gets a nod for best supporting actor.
At the end of the day, Sound Of Metal is a great film that will stick with viewers long after they watch it. It is bound to be an emotional roller coaster for anyone who views it and is quite honestly one of the best films to come out this year. The film will hit Prime Video on December 4th but is also available right now in limited theatres and TIFF's digital lightbox.
Sound Of Metal gets a 4/5!
I'd also like to take the time for thanking our readers for 50k+ reads. On behalf of all the writers here at DudeIWatchedThat, we can't thank you enough. If you'd like to engage more, you can follow us on twitter @DudeIWatchedTht. Our instagram is coming soon!
To rent Sound Of Metal now, you can do so with the following link. https://digital.tiff.net
Labels: 2020 Movie Review Written By Jaeden Noel