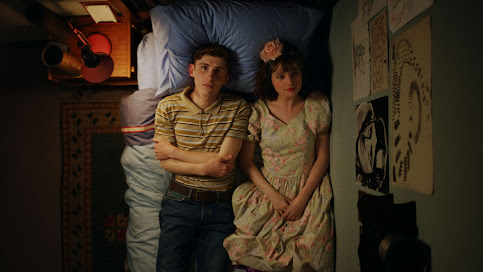 Brave, sweet and hilariously crude. Dating Amber is a blast that is bound to resonate heavily with not only members of the LGBT community, but also with anyone who's ever felt like an outsider. The film, starring Fionn O' Shea and Lola Petticrew follows Eddie (O'shea) & Amber (Petticrew) two high school seniors who are sick of getting questioned about their sexualities. To put the banter to an end, the duo come up with the perfect plan; pretend to date each other.

I loved this movie, virtually everything about it works. The screenplay penned by David Freyne who also directs the film, is the perfect balance between vulgar deadpan humour and emotion. The film takes the bold step of holding back no filter to create accurate teenage dialogue. Each character is written so uniquely as is the dialogue throughout the whole movie. Topic's like sex, debating if Oasis is punk or not, and authentic conversation make the film fly by keeping you hooked the entire time. Surprisingly, theres some great satirical moments in the film as well. Satirizing the insane pressure that adults themselves put on teenagers with things like the absolute cringe sexual education videos which usually only end up making the whole concept of sexual activity more awkward than it has to be. It also touches some on some themes such as confidence, death, love and just plain old growing up. All of these are bound to tug on your heartstrings and maybe even cause a few tears. Ruari O'Brien provides some beautiful cinematography with appealing colour palettes and a great sense of composition, making it not only a treat for the heart but also the eyes.

Dating Amber plays out almost like a modern day Chasing Amy, putting these teenagers in tough places based on sexual preferences, but done in a much more adequate fashion that suits the standards of LGBT portrayal in 2020. These characters are backed by great teenage performances by O'Shea and Petticrew, both of whom deserve their spot in an Hollywood film preferably sooner than later. The only real problem the movie has is it's extreme similarities to Netflix's Sex Education. But if you're a fan of that, it may work out in your favour as you're bound to enjoy this.

At the end of the day, Dating Amber is a great coming of age film that is sure to leave a smile on your face. With good representation and being a solid time all around, it is definitely worth checking out when it hits Prime Video in the USA/Canada on November 13th!