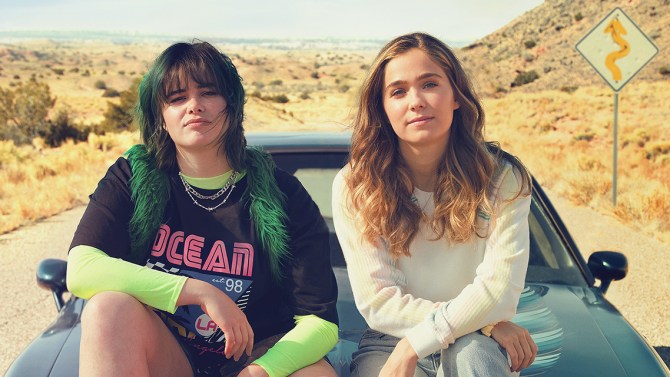 What if Amy & Molly from Booksmart went on a journey to get an abortion? What if Never Rarely Sometimes always had a less depressing older sister? Lot's of callback's like such are sure to pop up in your head with HBO Max's new teen comedy Unpregnant. The film is based on the successful novel of the same name & stars Haley Lu Richardson & Barbie Ferreira on a road trip adventure for Veronica (Richardson) to successfully get an abortion out of state without parental consent.
My biggest worry going into Unpregnant was how the films tonal balance would be. As we all know, abortion is a pretty "not-chill" topic to discuss as there are many opinions on it. Finding a comedic balance would be something pretty difficult to do, but luckily the film succeeds in finding that middle ground creating for a solid teen dramedy that is sure to succeed in the streaming-verse.
The film is never straight up pro abortion. It acknowledges the positive and not so positive aspects of it, especially at a young age. Obviously very similar to Never Rarely Sometimes Always but so different. NRSA is very bleak to say the least, despite being an excellent film it's not one to laugh at it's pain. Unpregnant on the other hand makes the best out of the shitty situation and goes with it. Most importantly shows how important it is that women need to be able to make their OWN decision when it comes to abortion and it is not up to anyone else to sway them in another direction.
Performances from both Barbie and Hayley were great. I wouldn't be surprised if we get more films with Barbie in a badass role considering her track record with this and last years season one of Euphoria. Haley Lu is for sure one of the better "teen" role actresses out there and would not complain if she popped up in future endeavours. Their chemistry works well in the sense of Kaitlyn and Beanies in Booksmart, although this film is surely to not be as significant as that one. The screenplay is surprisingly deeper than I expected it to be, instead of a simple "A-B-Problem-Solution-Ending" script, every situation these girls find themselves in on their journey is important and contributes to something in the end. The only glaring issue would be some questionable pacing within second act.
Otherwise, the film looks great thanks to it's well constructed cinematography and the color palettes in it are extremely modern and visually pleasing. At the end of the day, Unpregnant isn't going to be the film that you remember as one of the best of 2020 five years from now, but it's a solid smile worthy teeny bopper movie sure to leave a smile on your face and might even teach you a lesson or two on the importance of being pro-choice.
Unpregnant gets a 3.5/5!
As always thank you for reading. Be sure to check out Unpregnant on HBO Max or Crave + HBO! And be sure to follow us on twitter! @DudeIWatchedTht for updates!
Labels: 2020 Movie Review Written By Jaeden Noel