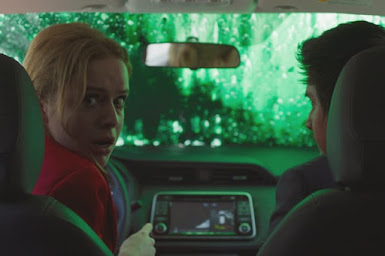 Despite being very hesitant on the whole TIFF Bell digital cinema thing and not being able to personally justify paying $26 to watch something at home (you all complained about Mulan but look at you now!), I figured as a member of TIFF I should probably support them as much as I can. So to start off my TIFF 2020 adventure I decided to rent Michel Franco's dystopian thriller New Order. The Mexican film follows the chain reaction of events that occur after a rich families wedding is invaded by a group of bottom-class protestors.

I must start off by saying, don't expect your typical invasion horror/thriller film. Although that is clearly the selling point based off it's minuscule plot summary and it's misleading trailer, the film uses that situation as rather a starting point to get the film going into it's real plot (which I think is best to just wait and see). Regardless, the film is still effective with it's political and societal statements creating for a tense well paced thriller.

The performances in the film are perfectly fine. No specific character or actor/actress does necessarily anything to make them stand out, but they all indeed do bring what they need to in order for it to work. Naian Gonzalez Norvind is clearly a great actress as seen with her performance as the lead role Marianne and I truly hope that this will be her gateway into some more mainstream stuff in the future.

What genuinely stands out however, is Michel Franco's absolute stunning sense of direction. Everything on a visual scale here is perfect. Constantly throughout the film I caught myself saying that "this is the best shot in the film" then 2 minutes later have it outdone with an even better looking shot. The beautiful imagery of Mexico itself is perfectly juxtaposed with the chaos emerging throughout the film. Colour choices are also extremely unique and fitting making the film recommendable alone based on these factors.

The film deals with some pretty heavy handed issues, so it was bound to get brutal. However, based on prior reviews and news I read on the film, it seemed like this was going to be on a level of Eli Roth violence. Is it? Well, no not really. The brutality is quick and abrupt and hard to see coming, but at the same time it's very teased. No graphic or violent scene was longer than 30 seconds and they were far and spread throughout the whole film. Perhaps it was my expectations, but I expected a little bit more chaos to ensue.

The screenplay is pretty average. It's unpredictable for the most part and is sure to subvert audience expectations in the likes of something like Uncut Gems (if you know what I mean). However, it's pacing is pretty out of wonk towards the second half of the film. In the first half Franco manifests a tense well crafted thrilling adventure, but the 2nd half loses most of that steam, shifting to more of a dialogue piece. It's commentary on "rich vs poor" is very effective. Perhaps even more effective than the same commentary in Parasite, but never reaches the heights of greatness that Parasite did.

I hope this film gets distribution soon because I'm genuinely excited to see all the different reactions to come out of it and while I can say I liked it, I can't help but feel I was mislead and expected something much more different. Wether it be the fault of the marketing or my naiveness, I regardless don't regret watching it, it just feels like it was missing a few things for me to call it great.