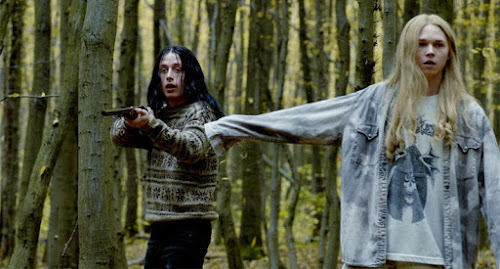 One thing about myself a lot of people don't necessarily know about is that I am a huge Metal fan. Slipknot & System of a down are two of my favourite bands along with a few in every other subgenera. One subgenera that genuinely has always peaked my interest is the Norwegian Black Metal scene. Although I believe their views on the world are at the least extremely questionable, the fact that it even exists is truly something worth researching.

Lords of Chaos gives a westernized look at the band that started it all: Mayhem. The biopic, directed by Jonas Åkerlund follows a teenage Euronymous on his entire Mayhem journey. From experiences with Death, his record label, the band Burzum and ultimately his relationship with fellow member Varg Vikerenes that lead to his murder in 1994. I viewed the film for the first time about a year ago as a mindless watch, but after peaking my interest once again as I started to explore Mayhem's discography more I decide to pop in the blu ray.

Firstly, I gotta sincerely give props to Vice studios for getting behind 3 of some of my favourite films of 2019 (Lord's Of Chaos, The Beach Bum and Climax). All which, are to say, fucked up in their own way. Lord's of Chaos, despite being a biopic in my eyes is truly a horror to be seen. I'm surprisingly shocked at a lot of the imagery that is on display here, yet at the same time happy considering the film's context. From the bands infamous church burnings & satanic imagery, to Dead's literal wrist slitting on stage to the absolute BRUTAL murder scene of Euronymous.

There are a lot of things to absolutely love about the film. The performances all around were great but who truly stood out was Rory Culkin. His performance as Euronymous was extremely well done and despite not having really seen him in anything since this came out in 2019, I truly hope he gets more opportunities like this. The cinematography is bold and appealing and the soundtrack was extremely well crafted. And despite being a truly horrible story of chaos, the film never necessarily forces you to automatically hate any specific person in the film. Even if they commit questionable acts, there's always glimpses of morality to show that these people are still indeed human.

The first 5-10 minutes of the film feel on the equivalent to Netflix's "The Dirt". Which I don't think is necessarily a bad film, it's just not the vibe I'd want from a Mayhem movie. From the 10 minute point to about an hour & 20 minute's into the film, its a total ride. But after that, it is unfortunately somewhat sloppy until the final two scenes. This pacing issue could have easily been fixed with a shorter runtime & even possibly by eliminating the entire relationship subplot between Euronymous and Ann Marit.

There were a lot of sequences and concepts that were really cool to see here too, using photography to create a sense of atmosphere and setting for these characters, "VHS" camera footage was also used a lot which is always something I love to see. It just seems Åkerlund couldn't fully embrace it. Feeling very similar to a lot of Harmony Korine's use of both in his films such as Julien Donkey Boy, I could only wish that Harmony was able to make this film instead. (Considering he is also a huge Mayhem fan).

Otherwise, it nails all the points a biopic has to in order to be successful. However, it could have always gone an extra step to reach the levels of ones such as Straight Outta Compton, but luckily isn't as low as Bohemian Rhapsody. At the end of the day, this won't be for everyone, its outright brutal and covers some pretty sensitive stuff. But nevertheless, despite it's sometimes lack of structure Lords of Chaos is a fun, metallic, and sometimes terrifying time. Even if you aren't a fan of a lot of metal or even none at all, the film is bound to give you insight on a world you probably would of never knew about.