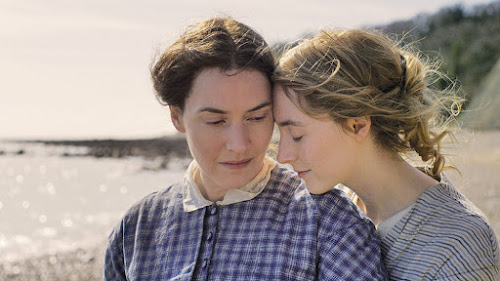 "This movie has the best of intentions but this didn’t work for me whatsoever."

Ammonite is a new film directed by Francis Lee and its stars, Kate Winslet and Saoirse Ronan. It revolves around an acclaimed but overlooked fossil hunter “Mary Anning” and a young woman sent to convalesce by the sea and develops an intense relationship, altering both of their lives forever in 1840s England.

LGBTQ films of recent memory have been not just excellent but, very influential to the next wave of aspiring filmmakers who are finally starting to get their voices heard. Moonlight is a great film, Call Me By Your Name is a staggering masterpiece that broke me unlike any other film and even Portrait of a Lady on Fire is a beautifully made movie. This all should’ve made me excited to see Ammonite with the addition of its excellent lead actors but, something never really clicked for me about the film. The trailer didn’t do anything for me as it started to look to me like a by the numbers, oscar bait attempt for an LGBTQ love story. I still wanted to give the film a fair chance and I was very fortunate to have the opportunity to see the movie during the Toronto International Film Festival this year. I’m sad to say that my worries going in was correct because the movie simply did not work for me.

That’s not to say this movie is an utter failure that does nothing right. Matter of fact, it actually does a lot that makes me admire some aspects of the film. Francis Lee was insistent that his movie be seen in a theatre the way it was intended (Given how hard it was to see it at TIFF in theatres or digitally) and he is correct. The film benefits from being seen in a theatre due to its cinematography and sound design. The movie has such great landscape shots and such excellent framing. It seems to have gone The Revenant approach of all-natural lighting as it creates a film that feels extremely realistic and really fits what the story needed. The cinematography may not be as colorful and lush as movies like or Call Me By Your Name Portrait of a Lady on Fire but, the deeper shadows and muted color tone actually really make the cinematography of the film stand out that much more. The film also has zero presence of a score to the film’s credit, it does allow the sound design to come through and really makes the film more immersive to be seen. I’m actually glad I was able to see it in theatres because watching a film at home would not do the film as much justice as it does in theatres.

The main performances from Kate Winslet and Saoirse Ronan are also very good. Both give very subtle performances that feel realistic and not seeking attention from the viewers. Both actresses seemed to be very passionate about the performances and even going as far as to choreograph their love scenes themselves. It results in a scene that does not feel like a male fantasy but rather a very realistic love scene. Saoirse Ronan probably seems to have her best chance of any year to win the best actress oscar considering the nature of 2020 as a year.

The biggest problem I have with the film is the story and screenplay. There’s definitely an attempt from Francis Lee to make a realistic love story and he has the best of intentions but, it just ends up feeling more like a by the numbers, oscar bait LGBTQ film that could pass for one of the fake trailers in front of Tropic Thunder. It’s very apparent that Winslet’s and Ronan’s characters are cold characters that don’t feel much of a connection to anyone which I understand but it’s also a perfect way to describe the film as a whole. It’s a very cold film that make’s it incredibly hard to feel a real connection, love, or any real chemistry in the film. Winslet’s and Ronan’s characters don’t have much if any real conversations in the film that allows them to connect with each other or share a deeper connection at all. They just often stare at each other or look at each other as that’s supposed to be how they connect? In the end, I just couldn’t feel or even connect to anything that happens’s between them which made me not care about what happens to both of them throughout the story. This made their eventual romance feel super hollow and unearned to me as I couldn’t feel the connection at all.

The film is also paced super poorly as scenes just go on for longer then they need too and makes the story feel slow yet not feeling like it took it’s time to develop any of the motivations between the characters. The film feels longer then it was and probably needed more depth or fat cut out. Finally, while I admire the sound design of the film, there really needed to be an actual score in the end. If the characters really do just stare at each other in order to feel a connection then a score would’ve really helped me that more clear and made the emotions of the movie that much more present. The quiet moments that come throughout the movie don’t help and feels like there needed to be a score to communicate the feelings more clearly.

In the end, Ammonite is a film with the best of intentions that missed the mark for me and made me feel nothing. There are such well-implemented elements here justifies it being a theatrical film but it left me nothing to feel in the end due to how cold it ended up being. I wanted to like this more but I guess I’ll have to stick to Call Me By Your Name or Portrait of a Lady on Fire for films that can make me feel for a real romance.

As always, thank you for checking out our reviews! Big shoutout to Hussain Alokaily for covering TIFF 2020 here. You can find his content on Letterboxd @GSR and view his excellent movie based youtube videos HERE!